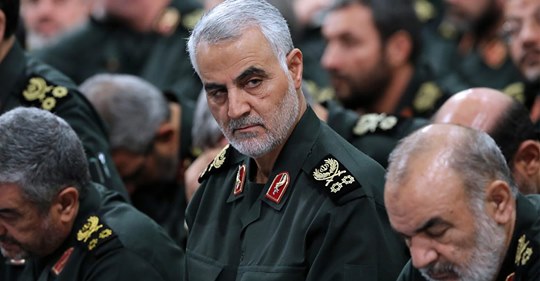 Check out this BBC documentary from February last year (on BBC iPlayer for 26 days). I suggest you watch if interested in the current crisis (and history of region) following the killing of General Qassem Suleimani by the Americans last week.

If the programme is accurate (and I think it is broadly so) he was responsible for the deaths of many British soldiers in Iraq but he also assisted in the Bush/Blair invasion of Afghanistan, Iraq and the recent destruction of ISIS in Syria and Iraq which probably saved British lives.

I won't shed any tears over him but have no doubt that Trump has done this to improve his election chances and not for a better world.
Posted by John Gray at Tuesday, January 07, 2020

Oh please!!..no lectures from Labour on events in the Middle East!
Your party was directly involved in the destabilization of the entire region under Blair, Hoon and Straw. Read the executive summary of the Iraq Inquiry. Labour is riddled with anti Semitism. But you think its an attempt by Trump (who is already ahead in the polls) to win the election. What are you smoking?

Looks like Trump has not responded militarily at all to the Iranian twenty missile attack on their airbases..?? Funny that? I thought according to you Trump wanted the chance to start a war with Iran?
Typically Corbyn didn't take the opportunity to condemn Iran or call out that Soleimani had the blood of British servicemen on his hands, nor did he reference the joint statement from UK, France and Germany on the matter?? Just banging on about the evil empire again.. he is Iran's man in London.

Trump was elected in a democratic process... but you stick to the script that everything he does is wrong. What ever happened to the great legacy of the Left fighting against Apartheid, the Spanish Civil War etc.. instead you become apologists for terrorism and organize marches against Trump's visits. You have badly lost your way John.

Yawn. I think you forget the Tories demand for war at that time as well. Don't you realise your internet SHOUTING makes Iranian TV appear almost rational

Blair and Hoon start an illegal war but....its the Tories fault... right on!
I think I will retain your quote "that Iranian TV is rational"..

..and furthermore the war the Tories, who were in opposition at the time, were misled by Labour and its dodgy dossier and unsubstantiated claims regarding WMD...

"almost" repeat "almost" but you are pretty bonkers IMO

The whole country was mislead.. and Labour took us to war and destabilized the entire middle east. That is the legacy you have to live with and somehow seeking to blame it on the Tories is more than a joke...

trolling again. read what I have actually said and stop making things up

Iranian TV is rational... according to you.. and Corbyn.

Answer the point about Corbyn being paid by Iranian TV...!!

I think it was a mistake to take such interview fees but he answers the point https://www.mirror.co.uk/news/politics/jeremy-corbyn-press-tv-2012-11927924

also, come on, there is stuff you can criticise Jeremy for but he is not corrupt https://www.islingtongazette.co.uk/news/politics/islington-north-mp-jeremy-corbyn-is-the-country-s-lowest-expenses-claimer-1-748369