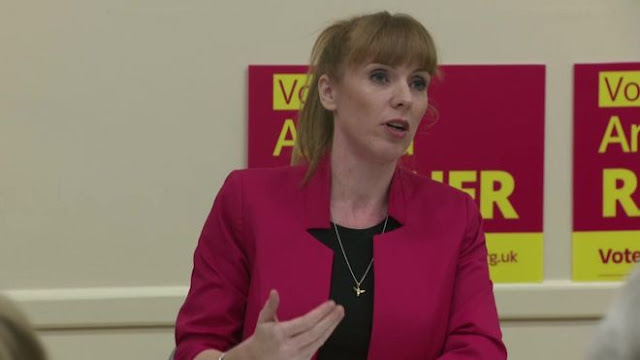 Hat tip BBC News about my UNISON comrade. "Shadow education secretary Angela Rayner has announced she is joining the contest to replace Tom Watson as Labour's deputy leader.
She is the fourth Labour MP to declare her intention to run, alongside Richard Burgon, Dawn Butler and Khalid Mahmood.
Ms Rayner said Labour now faced a stark choice following December's heavy election defeat - "win or die".
Both the new leader and deputy leader will be announced on 4 April, the party's ruling body has decided.
Clive Lewis, Lisa Nandy, Jess Phillips, Sir Keir Starmer and Emily Thornberry have formally entered the race to replace outgoing leader Jeremy Corbyn.
Shadow business secretary Rebecca Long Bailey, who is a friend and flatmate of Ms Rayner, is also expected to join the main contest soon.
Launching her deputy leadership bid in Stockport, Ms Rayner said Labour's defeat last month had left the party facing its "biggest challenge in our history".
She said Labour needed to find a "new kind of coalition" to regain power, and needed to "win back" former supporters who had deserted the party.
She said Mr Corbyn's leadership had been a factor in the party's poor performance, but also blamed the election strategy, saying its list of target seats had proved to be "wide of the mark".
"Seats where we suffered catastrophic defeats were seen as secure, while we tried to fight 'target' seats we had effectively already lost. It cannot happen again."
And she continued: "The quick fix of a new leader will not be enough. We must rethink and renew our purpose and how we convince the people to share it.
"Either we face up to these new times or we become irrelevant. The next five years will be the fight of our lives."

Ms Rayner said she would back Ms Long Bailey if she stood for the top job, adding that she wanted the leadership of the party to be a "team effort".
After the launch, Ms Long Bailey tweeted that she would be lending her "full support" to her "good friend" Ms Rayner in her pitch for the deputy's post.
Ms Rayner also unveiled a list of other Labour MPs backing her candidacy, including shadow trade secretary Barry Gardiner - seen as a potential contender himself - and senior colleagues Louise Haigh and Jonathan Reynolds.
Ms Rayner became shadow education secretary in June 2016, just over a year after she became MP for Ashton-under-Lyne in Greater Manchester.
After leaving school aged 16, she became a care worker and representative for the Unison union before entering Parliament. She has previously described herself as being on the "soft left" of the party.
At her launch she also called for the party to draw a "line in the sand" over the issue of anti-Semitism within its ranks, so it could "regain the moral authority" to unite the country against racism.
The party, she added, needed to "educate where there is ignorance" and "remove bigotry wherever it is found".
Posted by John Gray at Monday, January 06, 2020

Becky is a derogatory American slang term for a white woman. After Beyoncé used the term in 2016 in the song "Sorry", on her album Lemonade, it came to mean a "white girl who loves Starbucks and Uggs and is clueless about racial and social issues", according to the New Statesman.

Butler - dense
Rayner - dense
Long-Bailey - dense
Starmer - clever but utterly hypocritical
Phillips - dense
Burgon - so dense that light curves around him
Nandy - boring
Allin-Khan - who?
Which class were they all in ???????
THIRD CLASS

35% of households with an income of less than £20K pa voted Labour but 45% of the poorest households voted Conservative (YouGov).
It used to be that Labour had a problem persuading business that it was a credible party, but now it is not even believed by the real poor and working classes, as demonstrated in the election. I predict labour will continue to fail because there is a real lack of understanding that the lurch to the Left and the promise of free broadband, Waspi Pensions, unlimited NHS spending, 4 day working week, and the list goes on... were simply not credible. Now the excuse is BREXIT but how does this account for 4 electoral failures in a row?
Most if not all of the candidates supported remain... how out of touch were they. Now they are all quietly stabbing one another in the back. It's hopeless. I recommended before the election that you should listen to Kinnocks 1985 speech about unrealistic promises and being out of touch but it went right over your head.

Well Brexit was important but I think nearly everyone accepts it was not the only thing. That is why we must elect in my view a leader who can unite us and win next time.

John....
"We want to say what we mean and mean what we say. We want to keep our promises, and because we want to do that it is essential that we don’t make false promises. That is why we must not casually make promises that are so fanciful, so self-indulgent, so exaggerated that they can be completely falsified by the realities in which we live and the realities that we know we shall encounter. If we do not take that view, if we do make false promises, we shall lose integrity, we shall demonstrate immaturity, we will not convince the people... implausible promises don’t win victories. I’ll tell you what happens with impossible promises. You start with far-fetched resolutions. They are then pickled into a rigid dogma, a code, and you go through the years sticking to that, out-dated, mis-placed, irrelevant to the real needs, and you end up in the grotesque chaos of a Labour council hiring taxis to scuttle round a city handing out redundancy notices to its own workers. I am telling you, no matter how entertaining, how fulfilling to short-term egos – you can’t play politics with people’s jobs and with people’s services or with their homes. Understand that, please, comrades. In your socialism, in your commitment to those people, understand it. The people will not, cannot, abide posturing. They cannot respect the gesture-generals or the tendency-tacticians.
Comrades, it seems to me lately that some of our number become like latter-day public school-boys. It seems it matters not whether you won or lost, but how you played the game"....
Do any of you get it John?

I think some did but most of us are just devastated that we lost. We have to look at what worked and what did not and get a leader who can deliver.