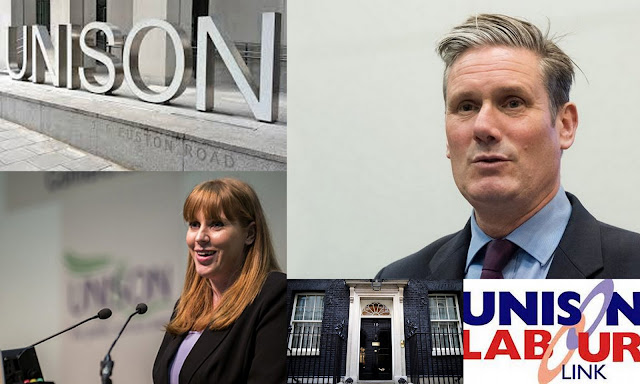 At this meeting of elected lay members of UNISON Labour Link and after a discussion of the disastrous general election result, all of us present unanimously endorsed Keir Starmer as the Leader of the Labour Party and Angela Rayner as the Deputy Leader.

We all wanted a Labour leadership team that would unite the Party, campaign against and hold to account this Tory Government then win a future general election for Labour.

I left the meeting early so we I could go to the nearby UNISON headquarters to take part in an special meeting of our National Labour Link Committee on the general election result and the Labour leadership.

This Committee is comprised of elected lay UNISON members from all over the country. After reports on the result by our union officers and then a long, at times very depressive (but strangely constructive) discussion on the General election result and lessons learnt, we began a debate on the leadership elections.

Members of the committee gave their thoughts on all the candidates and what feedback they had received on who should be the future leader and deputy.

I am really pleased that after a vote by secret ballot Keir was overwhelming backed as Leader by the committee as was Angela for Deputy.

While the debate was at times passionate with strong views expressed, we were on the whole, polite, reasoned and respectful at all times. There was even humour, self depredation and graciousness. This was UNISON at its best.

I was also so proud of Angela, who I have known as an UNISON activist for many years also her husband Mark and their lovely children. While there is no doubt she has risen to her current position on her own merits, she freely acknowledges that it was UNISON that helped her grow and supported her from social care worker to union rep to MP to shadow secretary of state to...lets see.
Posted by John Gray at Wednesday, January 08, 2020

You cannot be serious. I don't doubt that Angela is a nice person, but don't you think that we want the leaders of the party and potentially the country to be more than well intentioned. They need real depth, demonstrable intelligence, capability. Say what you want about Corbyn, Boris, Brown, Blair, Wilson, Callaghan, Thatcher, May etc... but they were well educated, extremely well read, can speak more than one language, well travelled..etc. Being a from a poor or disadvantaged background and pulling yourself up (whilst highly laudable) is not in itself a qualification for high office. Angela just isn't a match for the opposition and exposing her to even more media and public scrutiny will end in tears I'm afraid. If Labour want to be elected then they need to get serious about fielding some high quality candidates, unfortunately the gene pool is not looking that great.
God help us all.

What sexist rubbish. Angela is indeed a "nice" person but don't get the wrong side of her! She is not only a former care worker, but she was a large branch secretary and regional conveyor. Unlike most MPs she had real jobs before becoming an MP.

Hardie and Thorne both became PM did they? In what year?

yawn. Keir and Will were both working class people elected to Parliament who were mocked and taunted at the time for their accent and their clothes

They both failed to get Labour elected then, despite their "working class appeal"?

Nope. Keir helped formed the Party in 1906 and 17 years later it formed an minority government. Will became an MP in 1906 and was a member of two Labour governments. BTW you must hate and despise working class people. Self hatred?

No… but I do hate hypocrites....people who represent anti-Semitic party's, and whom hate Trump and hate America. People who are dogmatic and don't listen. People who throw the term racist at anyone who disagrees with their point of view. I also dislike people who term Conservatives "Far Right". I can't understand people whom can't even manage to share a conversation with Boris at the State Opening of Parliament nor sing the National Anthem but can sit with the IRA drinking tea whilst taking money for interviews from the mullahs.

hmmmm "I do hate"...."dogmatic and don't listen"... "anyone who disagrees with their point of view".

Have you looked in a mirror lately Anonymous?