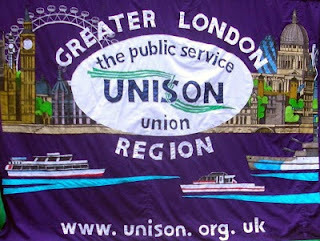 This morning I received notification that I had been re-elected unopposed as the UNISON Regional Finance Convenor for Greater London Region.

UNISON is the biggest trade union in London (and the country) with some 130,000 members.

Many thanks to all the branches that nominated me.
I have now been elected 13 times in  a row since 2007. This is only the 2nd time (I think) I have been re-elected unopposed.

Lots and lots to do in the coming year as we face up to a Tory majority government. No point just moaning (too much) about this, we just have to get on with it, defending our members and public services.

Our regional AGM is next month