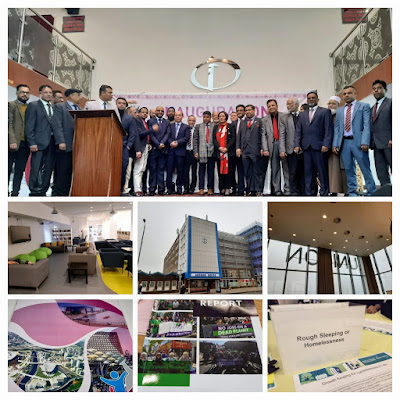 This morning (Wednesday) started off with a 9am tour and presentation at Anchor House in Canning Town with Councillor colleagues. Anchor House is a former Seaman's mission which is now a charity that specialises in supporting single homeless adults.

It has a very innovative proposal to convert unused space into a further 18 bedrooms. I was also impressed with the improvements to communal livings spaces and installation of a new kitchen and laundry.

Later I went to the UNISON HQ in Euston for a long meeting of its NEC Policy Development and Campaign Committee (PDCC). Which included some excellent reports from our devolved nations Northern Ireland, Scotland and Wales. Congratulations to Northern Ireland  for its recent successful NHS strike action over pay.

I was devastated to see that my beloved North Wales is now almost totally controlled by the Tories. Unbelievable. Incredible. Only Alan & Deeside (I was born and bred in Buckley) survived by a few hundred votes (we would have been wiped out if the Brexit Party had stood down). Need to learn lessons quickly before Welsh Assembly elections in May. Onward and forwards.

We spent ages  debating and voting on draft motions to our National Conference. Finished just after 4pm.

Next as a NEC member for Community (Voluntary sector and Housing Associations) I had a briefing on the Community Service Group in Greater London region.

At 6.30 pm I was in the Old Town Hall,  Stratford to take part in the public consultation on the Newham Council Budget proposals which went really well.  I sat on a round table with Councillors,  officers and residents discussing our proposal to tackle Rough Sleeping by increasing spending by 400% to £1.8 million per year. Residents were challenging but on the whole broadly supportive of all our budget proposals especially those on improving our environment. They recognise that due to continual government cuts, difficult choices will have to be made.

Final event of the day was the launch of a new community group called "Voice of Newham". The Mayor, Rokhsana Fiaz, myself and local Councillors were invited to speak about our future plans for Newham and how by working with all our communities we will bring about change. Finished about 11pm.

Shame you don't focus a bit more of your time on Newham rather than on endless union meetings. The ratepayers would appreciate you concentrating on the day job... after all we are paying for it.

Well, I think with the morning visit, budget consultation and community event that Council tax payers had their money worth.

"We spent ages debating and voting on draft motions to our National Conference", all during the day job... and your blog is riddled with endless Union derived "work" and focus. You seem to be taking your public salary under false pretences! You should be "requesting" this time off for Union work, and not just taking it. The rights for work off for Union work are for shop stewards representing workers, and not for political activists. You should know better John.

Now you are being rather silly. I am currently an "office holder" not an employee. The borough is getting more than its pound of flesh. Fancy criticising a Labour activist for participating in his union.

Yawn. The anonymous troll has been trolling again. Which part of the words “no trolls” doesn’t he understand?