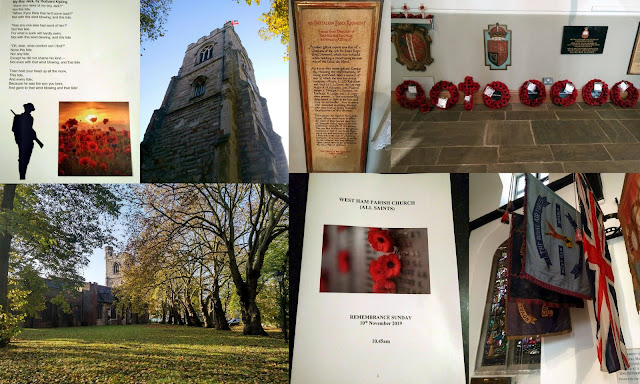 This morning I attended yet another beautiful Remembrance Sunday service at the historic 12th Century West Ham Parish Church. I am a local West Ham Ward Councillor but I was there today to represent Newham Council as Deputy Mayor together with Deputy Cabinet lead for Children Service's, Cllr Carleene Lee-Phakoe (who had brought her delightful 11 year old daughter) and our Council's Chief Legal Officer, Daniel Fenwick.

There was soldiers from our local regiment 7 Rifles present and other voluntary groups with a number of former military veterans proudly wearing their medals including Cllr Winston Vaughan,  who served in the British Army during the Aden Emergency.

The Rev’d Canon Alex Summers conducted the service and gave a moving sermon during which he mentioned how he and his young family had visited the graves of his relatives who died in battle during the first world war. He made an important point that will future generations with the passage of time forget what has happened in these Wars?

We all hope not. If we forget how horrible and wasteful war is then it is more likely to occur again (and again).