Dave Prentis: "This election is the fight of our lives" 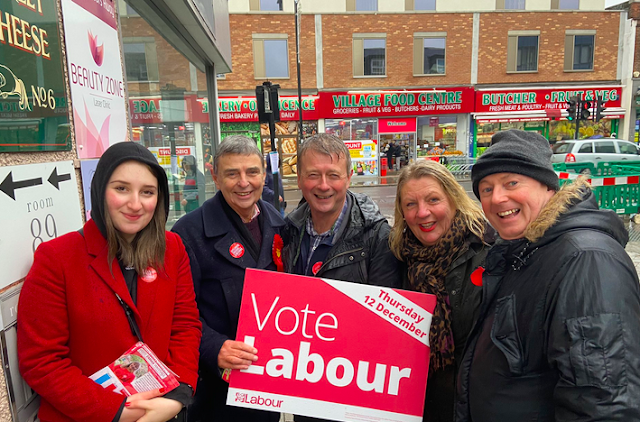 Hat tip UNISON General Secretary, Dave Prentis blog: "Election day is less than five weeks away – and this election is the fight of our lives. After a decade of Tory austerity, public service workers know better than anyone the terrible toll that austerity has had on our communities, the services you provide and on your own lives.
That’s why I’ve been getting out on the doorstep and campaigning for public services – and for a Labour government. So far I’ve been supporting Labour candidates, and UNISON members, Bambos Charalambous and Emma Whysall, and I’ll be out campaigning across the country in the weeks ahead. It really is vital that everyone who wants to see a Labour government gets out on the doorstep and campaigns for Labour – and tells their friends, family and colleagues why they’re voting Labour too. Whilst Boris Johnson may have the money and the media on his side, Labour has something stronger – people.
There’s something else Labour has though – common sense ideas that can changes our country – and the lives of UNISON members – for the better. So it was great to see Labour announcing plans to extend maternity leave, offer real help on childcare and rebuild vital sure start centres. The same goes for giving every family the chance to have a warm home and an affordable energy bill. We have the oldest and most poorly insulated houses in Europe and we need practical measures to address this. Again – this is just the sort of change our country needs.
I know that in the days and weeks ahead, Labour can win this election where it counts – both on the streets, and by showing it has the best plans for working people. I promise you our union will be playing our part – and so will I".
Posted by John Gray at Monday, November 11, 2019