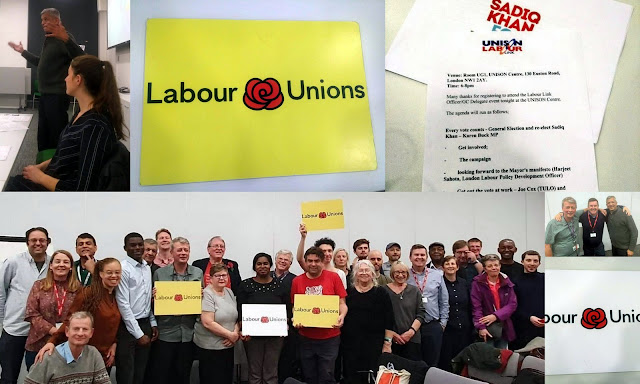 This evening I chaired a meeting of London Labour Union organisers at the UNISON centre in Euston. It had originally been intended to be a trade union consultation on the London Mayoral manifesto for May 2020. However, following the calling of the general election, it was widened to involve organisers from the main trade union affiliates. It has all been at bit last minute so apologies to affiliates who were not invited or unable to come at short notice.

Our first speaker was Joe Cox from national "Labour Unions"who spoke about how important it was in order to preserve basic workers rights in this country to have a Labour Government elected. UNISON London Political Secretary, Steve Terry, explained how the unions in London will divide marginal seats amongst themselves in order to offer support.

UNISON regional secretary, Maggi Ferncombe, in response to questions, spoke about the guidance that all unions will be sending out to their branches on what they can do legally during the campaign to stop falling foul of the anti-trade union legislation that deliberately seeks to prevent us from supporting Labour.

Ffion Meagher from London Labour Policy gave us a briefing on the Mayoral/GLA manifesto consultation process. Once we get this general election over with we need in London to  jump straight into this Mayoral election.

Our final speaker was London Assembly member (and my long standing Newham comrade), Unmesh Desai, who was standing in for Karen Buck MP, who was stuck in Parliament voting for a new Speaker. He gave a rousing speech about how vital it was to win this election and to re-elect Sadiq.

My final comments to meeting was that many of us here will have suffered in real terms 20-30% cuts in their pay since the last Labour government in 2010. In order to increase pay and have a fair economy, we need to win this this general election.

However, the result will be decided by a couple of dozen marginal seats. Some of which we will win or lose by a handful of votes. If the 40 of us here tonight went to a marginal to campaign in one session alone, we may identify or persuade 5 or 6 voters to come out and vote Labour and win that marginal.

Where is your data to support your statement that "My final comments to meeting was that many of us here will have suffered in real terms 20-30% cuts in their pay since the last Labour government in 2010"?? Show me your evidence for this spurious claim...