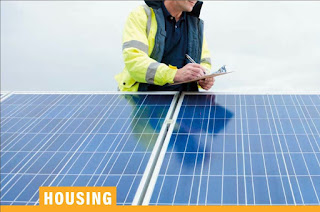 "Everyone has the right to a decent, secure home. In 1945, Labour promised to ‘proceed with a housing programme with the maximum practical speed until every family in this island has a good standard of accommodation’.

In 2019, we renew that pledge.But too many people are being denied their right to a good home by our housing system that treats homes as financial assets rather than places to live.

There is no starker symbol of the failing housing system than the horror of the Grenfell Tower fire. A Labour government will bring system-wide change, so that a tragedy like Grenfell never happens again.

We will introduce a £1 billion Fire Safety Fund to fit sprinklers and other fire safety measures in all high rise council and housing association tower blocks, enforce the replacement of dangerous Grenfell style cladding on all high-rise homes and buildings, while introducing mandatory building standards and guidance, inspected and enforced by fully trained Fire and Rescue Service fire safety officers.

Grenfell Tower was the confirmation of a more far reaching crisis. Everyone knows of someone affected by the housing crisis: younger people unable to buy a first home, renters trapped in damp flats, families stuck on council waiting lists, leasehold home-owners hit by unfair fees, people who are homeless living and dying on our streets. The gap between the housing haves and have-nots is at the heart of the injustice in our country today.

Since 2010, the Conservatives have slashed funding for new homes, refused to regulate for higher standards and given a free hand to commercial property developers. There are fewer new homes for social rent, a million more households stuck renting from a private landlord, 900,000 fewer young people owning a home and more than twice as many people sleeping on our streets. Only Labour has a plan to fix the housing crisis.

We will act on every front to bring the cost of housing down and standards up, so that everyone has a decent, affordable place to call home. Labour will create a new Department for Housing, make Homes England a more accountable national housing agency and put councils in the driving seat. We will set out a strategy for a flourishing construction sector with a skilled workforce and full rights at work.

Labour will set up a new English Sovereign Land Trust, with powers to buy land more cheaply for low-cost housing. We will use public land to build this housing, not sell it off to the highest bidder.

Developers will face new ‘use it or lose it’ taxes on stalled housing developments. We will keep the Land Registry in public hands, and make ownership of land more transparent. We will make brownfield sites the priority for development and protect the green belt.

Labour will tackle the climate crisis and cut energy bills by introducing a tough, new zero-carbon homes standard for all new homes, and upgrading millions of existing homes to make them more energy efficient.

We will review the planning guidance for developments in flood risk areas. Council and Social Homes The only way to deliver on everyone’s right to a good home is to build publicly funded social housing.

We will establish a new duty on councils to plan and build these homes in their area, and fund them to do so, with backing from national government.

We will scrap the Conservatives’ bogus definition of ‘affordable’, set as high as 80% of market rents, and replace it with a definition linked to local incomes. These council and housing association homes will be more affordable than market housing and built to higher standards.

We will end the conversion of office blocks to homes that sidestep planning permission through ‘permitted development’.

We will stop the haemorrhage of low cost homes by ending the right to buy, along with the forced conversion of social rented homes to so-called ‘affordable rent’.

We will review the case for reducing the amount of housing debt councils currently hold. And we will give councils the powers and funding to buy back homes from private landlords.

We will give tenants a stronger say in the management of their homes and stop social cleansing by making sure regeneration only goes ahead when it has the consent of residents, and that all residents are offered a new property on the same site and terms.

We will fund a new Decent Homes programme to bring all council and housing association homes up to a good standard. Home Ownership Under the Tories, home ownership is getting further out of reach for more and more people.

Numbers of new affordable homes to buy have fallen, and fewer younger people can afford their own home.

We will build more low-cost homes reserved for first-time buyers in every area, including Labour’s new discount homes with prices linked to local incomes.

We will reform Help to Buy to focus it on first-time buyers on ordinary incomes.

We will introduce a levy on overseas companies buying housing, while giving local people ‘first dibs’ on new homes built in their area.

We will bring empty homes back into use by giving councils new powers to tax properties empty for over a year. Labour will end the scandal of leasehold for the millions who have bought their home but don’t feel like they own it.

We will end the sale of new leasehold properties, abolish unfair fees and conditions, and give leaseholders the right to buy their freehold at a price they can afford. We will introduce equivalent rights for freeholders on privately owned estates.

Private Renters More than 11 million people rent from a private landlord and many of them are at the sharp end of the housing crisis. We will take urgent action to protect private renters through rent controls, open-ended tenancies, and new, binding minimum standards. Labour will stop runaway rents by capping them with inflation, and give cities powers to cap rents further.

We will give renters the security they need to make their rented housing a home, with new open-ended tenancies to stop unfair, ‘no fault’ evictions.

We will make sure every property is up to scratch with new minimum standards, enforced through nationwide licensing and tougher sanctions for landlords who flout the rules.

We will fund new renters’ unions in every part of the country – to allow renters to organise and defend their rights.

We will get rid of the discriminatory rules that require landlords to check people’s immigration status or that allow them to exclude people on housing benefit.

We will give councils new powers to regulate short-term lets through companies such as Airbnb.

Homelessness No one should sleep without a roof over their head in one of the richest countries in the world. But under the Tories, the number of people sleeping rough has more than doubled. Over 125,000 children are now living in temporary accommodation, without a home to call their own – or the space they need to thrive.

Labour will tackle the root causes of rising homelessness with more affordable homes and stronger rights for renters. Labour will end rough sleeping within five years, with a national plan driven by a prime minister-led task force. We will expand and upgrade hostels, turning them into places where people can turn their lives around. We will make available 8,000 additional homes for people with a history of rough sleeping.

We will tackle the wider causes of homelessness, raising the Local Housing Allowance in line with the 30th percentile of local rents, and earmarking an additional £1 billion a year for councils’ homelessness services.

We will bring in a new national levy on second homes used as holiday homes to help deal with the homelessness crisis, so that those who have done well from the housing market pay a bit more to help those with no home.

We will save lives this winter by ensuring extra shelters and support are in place in all areas. And we’ll repeal the Vagrancy Act and amend antisocial behaviour legislation to stop the law being used against people because they are homeless.

(Long post but what a brilliant housing manifesto. Restoring the political duty to decent homes for all is key. If this is implemented we will solve the housing crisis in Newham and elsewhere. I have put bold emphasis and underlined what I think are the most key commitments)
Posted by John Gray at Thursday, November 21, 2019

Labour’s proposed income tax rise for those with incomes above £80,000 would affect only the highest-income 3% of adults. But this accounts for less than a tenth of the additional revenue Labour says it would raise.
About three-quarters of the revenue comes from increasing taxes on companies and their shareholders. It would be a mistake to think of this as falling entirely on ‘the rich’.
To the extent that corporation tax falls on company shareholders, that includes everyone with a defined contribution pension. And in practice much of the burden will be passed on to companies’ employees through lower wages, and customers through higher prices – and that means all of us.
IFS

You must watch "Beattie" and Maureen Lipman's take on Labour. Maureen revives her character from the 1980's and this lifelong labour supporter has an interesting change of heart now. Hilarious!
Hat tip Ian Austin (former Labour Minister).

"Labour’s manifesto adds up to a recipe for decline"...hat tip Financial Times.

Anyone saving in a pension is a long term investor and should welcome investment in improving public services and infrastructure. This will increase profits.

DC pensions are risky and expensive and Labours Collective DC commitment should be transformational for pension savers.

Maureen has been leaving the Labour Party for many years now. I think the first time under Blair?