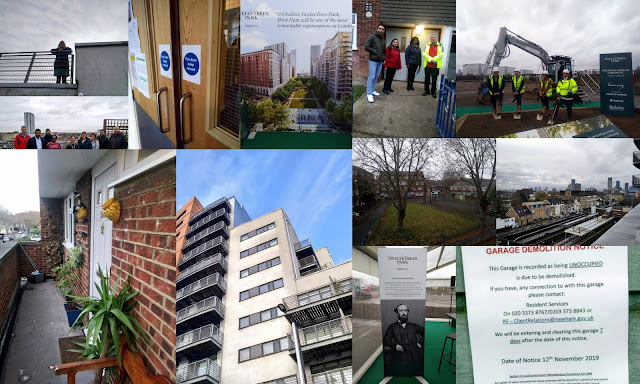 Amidst the madness of the General Election campaign I have to get on with the day job. On Friday I went to meet Residents in Ibex House in Forest Gate with local Councillors Rachel Tripp, Anamul Islam and officers from L&Q Housing Association. There has been issues regarding the lift and fire safety. The tower block has 105 homes and at its highest has 12 floors but only one lift. This lift has been out of action on a number of occasions (sometimes over a week). L&Q are proposing to install a new lift.

L&Q also need to clarify that the cladding on the block is safe and there are a number of repairs that need to be carried out such as fire doors that do not close properly. L&Q have undertaken to send us (and residents) an action plan.

I must admit that I thought L&Q were a living wage employer but outsourced staff working at the block are only just paid over the legal minimum.

Later I joined the Newham Mayor, Rokhsana Fiaz, to the ground breaking ceremony at what is now called TwelveTrees Park which is right next to West Ham Station. This used to be site of a former Parcel Force depot and it is planned that just under 4000 homes will be built here. It is a partnership with Berkeley Homes, Peabody Housing Association and the Mayor of London. I hope that the new tower blocks will have more than one lift!

Finally, I met residents, Deputy Cabinet lead Cllr Shaban Mohammed,  local Councillor Pushpa Mkwana for an unannounced walkabout around Newham Council owned Gainsborough Estate in Little Ilford.  There had been a number of issues regarding minor repairs and caretaking. It is a marvellous red brick low rise estate. It was agreed that we would come back with repairs and cleaning managers in the next few weeks for a full inspection and draw up our own action plan.

I would like to thank Kate (and the other 2 residents) in Ibex House and Sonia in Gainsborough for their work as resident advocates. We need a Kate and Sonia in every block or estate in Newham to hold all landlords and freeholders to account.
Posted by John Gray at Friday, November 22, 2019