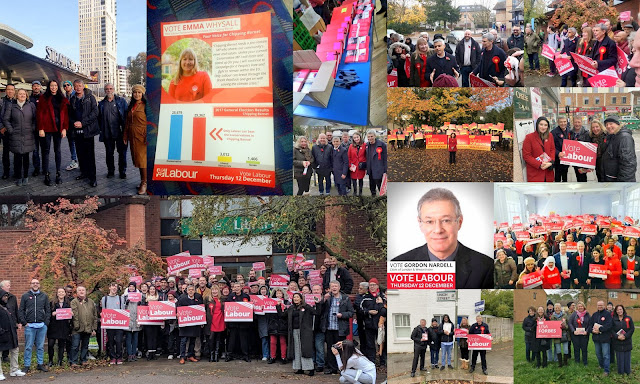 This morning West Ham Labour members met up outside Stratford Station to go to the launch rally of Labour candidate, Gordon Nardell QC, in the Cities and Westminster seat. This was a packed rally with guest speakers, Shami Chakrabarti and Kier Starmer.

The Labour Party has asked West Ham to support Cities and Westminster in the General election and our Chair of West Ham CLP estimates that we had about 25 of our members attending the rally and the canvass afterwards.

After the canvass I went to the "Big Unions Campaign" launch with West Hammer UNISON member Mumtaz Khan, in Chipping Barnet, of trade union lawyer, Emma Whysall, who only lost out by just over 300 votes in the 2017 General election.

Our UNISON General Secretary, Dave Prentis, was there as well as London Mayor, Sadiq Khan. After this rally I went on a UNISON canvass team with our General secretary, Assistant General Secretary, National Labour officers and National Chair of Young Labour, Miriam Mirwitch. We got absolutely soaked but had a successful canvass in (believe it or not) "Union Street"!

My last call was to a resident who was a traditional Labour supporter who felt very torn about who to support this time. However, she was so impressed that the Party had turned up on her doorstep on such a wet and horrible day that she was willing to give us the benefit of doubt and vote for Emma.

Our West Ham Labour Candidate, Lyn Brown, had also been out "on the knocker" supporting Labour candidates in Hull and Peterborough.
Posted by John Gray at Saturday, November 09, 2019

Don't you mean "Sir" Keir Starmer and "Dame" Shami "my kids are at private school"Chakrabarti. John when are you going to wake up and smell the coffee?