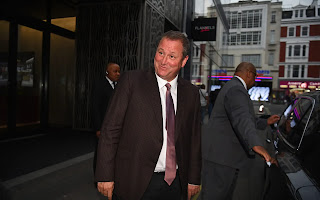 "Sports Direct tycoon Mike Ashley has blocked a Labour councillor from joining the retailer’s board meetings after a spat with Jeremy Corbyn.

The billionaire wrote to John Gray, who is also the vice-chair of the Local Authority Pension Fund Forum (LAPFF), to say that he could no longer attend Sports Direct’s board meeting in December.

It comes after the Labour leader accused Mr Ashley of taking advantage of the UK’s “corrupt system” in a blistering attack on capitalism on Thursday.

Corbyn had labelled Mr Ashley a "bad boss", accused him of not paying staff properly and said he had an exploited workforce.

Sports Direct hit back in the letter to Mr Gray on Friday, saying Mr Corbyn has a "complete lack of understanding" and arguing that many successful retailers had worked their way up from nothing.

The letter, from the retailer’s legal boss Tom Piper, said: “It was disappointing to read in the press yesterday the personal and unfounded attacks against Mr Ashley made by Jeremy Corbyn.”

“In line with Mr Corbyn’s complete lack of understanding of the state of UK retail, he should be reminded that the sector is a huge employer for the nation, and that it is one of the few sectors where there is no glass ceiling.

“Indeed as an example many senior management members of staff at Sports Direct, past and present, started on the shop floor. Thus his views on Mike Ashley and Sports Direct contradict his socialist utopia.”

Mr Ashley, who is Sports Direct’s founder and chief executive, said he would welcome outsiders at board meetings following criticism over working conditions and how the company is run at its annual gathering with shareholders in September.

Mr Gray, who was at the meeting and is also a Labour councillor for the London borough of Newham, wrote to Mr Ashley nine days later to say he would like to take him up on his offer and an agreement was reached.

Responding to Sport's Direct's U-turn, Mr Gray said: "I'm really disappointed. We have made critical but constructive comments about the governance arrangement of Sports Direct over the years, which we believe is unsatisfactory; why the organisation got in trouble over awful labour rights, is it symptom of wider problem; the massive £600m bill; the accountants who walked off.

"I've had engagement with a number of large companies over the years. I happen to be a Labour concillor but in my role as vice-chair, I represent the pension funds. I have never been challenged in that capacity.

"I get it, there is an election and it's a crazy world but our [LAPFF] chair is an independent councillor, so if there's a problem with me, which I don't accept, then what about he asks our chairman to attend?"

But on Friday Sports Direct’s Mr Piper said: “The board cannot, as a matter of good governance, allow an observer to attend board meetings where there is such a clear conflict of interest between the two parties.”

Sports Direct was criticised by MPs in 2016 for “Victorian” working conditions after an investigation uncovered workers at its Shirebrook warehouse being paid below minimum wage and penalised for taking breaks.

Mr Corbyn promised on Thursday to go after some of Britain’s richest people in a bid to position the Labour Party as being on the side of the “many not the few”.

It came as the Labour leadership appeared to endorse a call to effectively outlaw billionaires.

As well as Mr Ashley, the Labour leader also singled out Crispin Odey, who runs one of the country’s largest hedge funds; media mogul Rupert Murdoch; the Duke of Westminster, a major land owner; and Sir Jim Ratcliffe, boss of energy firm Ineos.

Sir Jim, the Duke and Mr Ashley contribute an estimated £167m to the Exchequer each year.
Posted by John Gray at Friday, November 01, 2019