"On the knocker" in Sloane Square 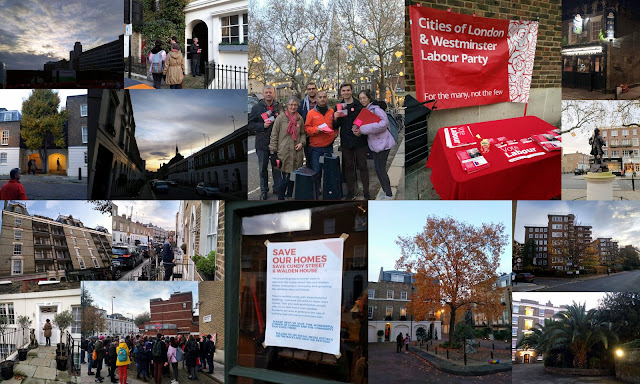 This afternoon I went to campaign in the Tory held marginal in the Cities and Westminster seat. We met outside Pimlico Station and after a short speech by our impressive Labour candidate, Gordon Nardell, I went off with a canvass team with fellow West Hammer, John Morris and my old GLA Assembly/UNISON comrade, Murad Qureshi.

Westminster also has some of the most deprived areas in London.

This part of Cities and Westminster was not, I freely admit, a particularly "Corbyn or Labour Friendly" part of London but we did identify new Labour supporters and, of course, the purpose of canvassing at this stage is also to identify who are non supporters, so that we do not waste any further resources on contacting them.

I really enjoy going to different areas and being challenged as a Labour supporter and, as usual, nearly everyone we spoke to was polite and not aggressive or confrontational. Even if they do not agree with you, the vast majority of people I have spoken to while canvassing over the years are actually pleased that you have come to their door to seek their views (even if they don't want to actually speak to you).

My best conversation of the session was with an elderly retired senior military officer, who said he didn't normally vote since he has spent most of his life outside this country but the one and only time he did vote, he had voted for Labour.

Afterwards some of us warmed up and had a quick pint at a wonderful pub called the "Fox and Hounds" which was hidden away and you would never know it existed from the high street.
Posted by John Gray at Sunday, November 17, 2019