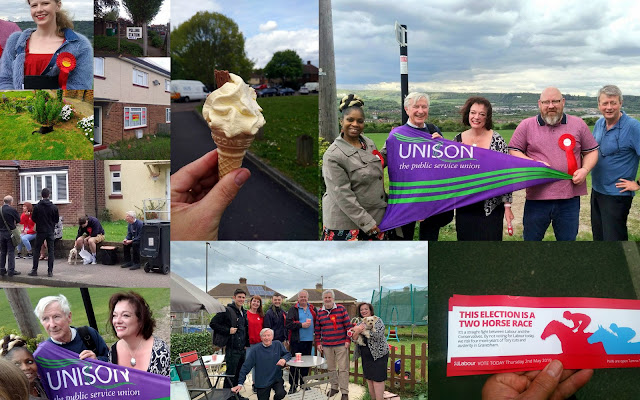 On Thursday I went to support Labour candidates standing in the local elections in Kent. There were no London Council elections this year. Our West Ham Labour MP, Lyn Brown (a long standing UNISON member and Shadow Finance Minister) came along with Cara, her Labour attack dog as well as the Chair of West Ham ward, Ian Mills. .

We firstly went to support Lola Oyewusi, who is my UNISON branch assistant secretary who was standing for Labour in Tonbridge and Malling to be a Councillor. She also had support from her fellow Jo Cox Leadership colleague, Olga FitzRoy.  Sadly Lola was not elected in this safe Tory ward but she was elected to her parish council as the first ever Black Female Councillor! Well done Lola!

London UNISON Labour Link had been asked to support Gravesham. Lyn, Ian, Cara and I went door knocking to "encourage" Labour voters to come out to vote.  The local Labour Party was well organised and the lists of Labour supporters who we were targeted to "knock up" and remind them to vote was very accurate. Which is let me say, not always the case.

I carried on the West Ham tradition of buying everyone an ice cream 99 chocolate flake.

Great news that that Labour took control of the Council on Thursday and in that ward, Labour won all of the seats (and the Kent Council by election). Excellent!

I had to get back to Newham for my Councillor surgery, to be a judge at our borough school public speaking competition then go to a leaving do for a much valued Council officer.