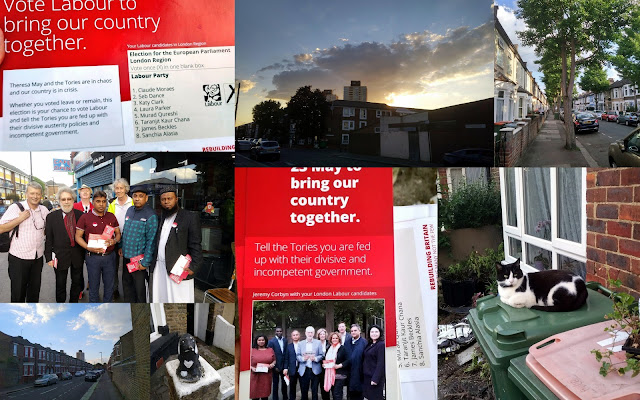 Picture college from Labour campaigning last night in West Ham ward. Labour has lost votes to remainer and brexit parties but the ward is still a Labour heartland. Some voters made it clear that while they are making a protest against current Labour Party/Government policy over Brexit and that they will return to Labour at the next election.

The single most significance response that I came across was still complete Labour Party identification and loyalty. "Of course we will be voting Labour".  Which is very humbling when we are clearly in a national political pickle.

There are always some light-hearted moments in practically any canvass. I knocked on one door and said I was here on behalf of the Labour Party etc. The resident told me he will not vote labour despite his support for Labour and the Party leader, since the Council and the Councillors are not any good! At this point I thought it best to declare that I have been his local Councillor for the last 9 years and am currently the Newham Council Deputy Executive Mayor. Following which we had a surprisingly constructive conversation about his concerns and I hope he has now changed his mind.

Another resident was very cagey about whether he was voting Labour and said he was undecided. I asked him if he had voted for Labour before and he answered "Yes, but the last time I voted for you lot, you f##ked up the Country!".

Finally, I met a lovely former Bow Neighbourhood, Tower Hamlets UNISON colleague who insisted that she was going to vote for me on Thursday no matter what. I had to explain I was not actually standing...
Posted by John Gray at Wednesday, May 22, 2019