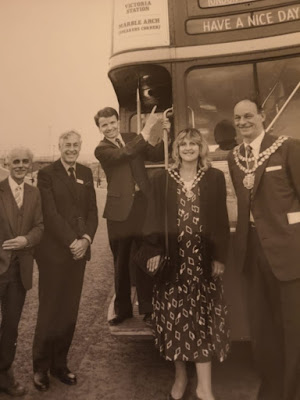 Hat tip Newham Recorder "Tributes have been paid to former council leader Frederick Jones, who has passed away aged 84.

Born to Bill and Violet Jones on May 5, 1935, the former Newham Council leader who loved fighting in the ring and political arena attended Tollgate Primary and Plaistow Grammar before running May's Cafe near Freemasons Road.
His daughter, Sandra Jones, said: "His heart was representing the people of Newham. He just wanted to do right by people and fight their cause."
A left-wing councillor, Frederick became disillusioned with the direction of Labour under former prime minister Tony Blair and the knock on effects in Newham.
He became an independent councillor after a brief stint with the Liberal Democrats, representing the then ward of Greatfield.
In the 1980s, Frederick had risen through the ranks to become the councillor in charge of housing when the local authority expelled a family from their council home for being racist.
"I'm proud of the fact he did that. It was quite controversial because Newham was quite a racist place then.
"He always stood by his beliefs and wouldn't let anyone deter him from what he deemed to be right," Sandra said.
The keen chess player was no stranger to battles, having taken on the then Conservative prime minister Margaret Thatcher over hospital closures in Newham in the 1980s.
But a dedication to the people of Newham drove him on and saw him take a leading role in getting Newham University Hospital and London City Airport built.
Frederick married Lesley Garner in 1958 after their love of sport brought them together. They went on to have three children.
Much of family life revolved around politics. Sandra recalled leafleting and canvassing with her dad in the build up to elections.
"When he was no longer part of the council he would still help anybody. He was always keen to do right by people. That's how I remember Dad," Sandra said.
Frederick passed away in his sleep on May 13. He is survived by his children Leslie, Sandra and Claire and four grandchildren.
He will be laid to rest at City of London Cemetery in Aldersbrook Road at 11.30am on June 5."
Posted by John Gray at Tuesday, May 28, 2019