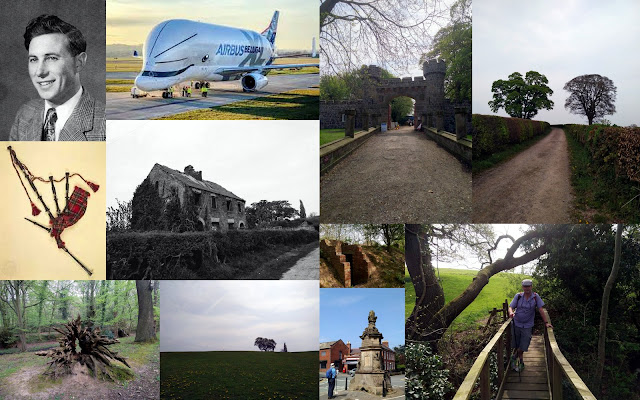 Off message but a post from a lovely 5 mile Easter walk in North Wales (pathfinder guide walk  5 "North Wales, Snowdon and Offa's Dyke").

I was brought up only a couple of miles away in Buckley, but have not been back to this area since, so it was more than a little emotional to visit places I could remember from my youth. Hawarden has the remains of a Welsh/Norman Castle and also the more modern home of  19th Century, British Prime Minister, William Gladstone. As a child I used to go conker picking in Hawarden Park.

A close school friend of mine, Ken Taylor, had a family small farm holding somewhere nearby. But I could not for the life of me remember exactly where? I suspect we walked past it.

Much of the early part of the walk is dominated by the sight of massive Airbus (aircraft manufacturer) factory in Broughton. My father, another John Gray, used to work in the factory in the 1950s and was also an active trade unionist (Assistant branch secretary of the Electricians union - now part of Unite) and a local Labour Councillor.

Seeing the size of the factory and knowing its huge importance to the local economy, you can understand the concerns that many have over its survival if things go wrong over Brexit.

Halfway thorough the walk amongst decayed World War 2 shelters, to our amazement, we could could hear someone playing the bagpipes in the middle of nowhere.  Our path took us away from the bagpipe player, so we were not able to find him (or her).

The latter part of the walk was more rural and isolated. Bilberry wood with its bluebells was lovely.
Due to the spring foliage we could not see much of either the old or new castle, so will return again another time. Hopefully, sometime very soon.
Posted by John Gray at Monday, May 06, 2019