The Emperor has no clothes. DC Pensions 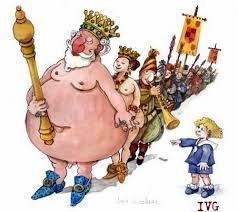 From Professional Pensions "John Gray looks at whether current contribution levels across DB and DC are adequate.
As well as being an employee representative on a pension board I am also a UNISON trade union branch secretary with members in more than 140 different private and public service employers.
While I am pleased that auto-enrolment (AE) has taken off so far, I am astonished about how little money employers are paying into pension pots. While many do pay more than the statutory requirement, we see well known national organisations with supposedly good reputations paying peanuts into their employee pension schemes.

If you put in only the AE 8% then you will be retiring and die in relative poverty.

I remember my first ever TUC pension course and our tutor (by coincidence the father of present day PLSA CEO, Joanne Segars) telling us there was an unscientific rule of thumb that you need to put around 20% of your income into a pension for 40 years to retire on half pay and receive a lump sum. Since workers cannot afford to pay 20% into their pension the employer has to pay the greater share.
Whenever I repeat this story to trade union members and to employers they are genuinely horrified at both the amount and the length of time needed.
I know this 20% rule of thumb is full of holes but recently I went to the website of a well-known stakeholder provider and spent a little time on its pension calculator site. While there is no such thing as a perfect projection I was pretty shocked at what I found.
How much?
I used the example of a worker aged 28, who has no existing pension provision on £30,000 per year, who is planning to retire in 40 years' time at age 68. I worked out that not 20% but a ridiculous 50% (£1,250 per month) of their income would have to be invested in order to hopefully retire on half pay (with no lump sum).
If you include the projected state pension you will still have to pay in an eye-watering 34% of your income (£850 per month). So only paying 20% into your pension for 40 years will actually get you nowhere near half pay. If you put in only the AE 8% then you will be retiring and dying in relative poverty.
Okay, maybe under AE a 28-year-old will by that age have some existing pension provision. Current investment assumptions may prove to be wrong and be too pessimistic. Perhaps the industry will really drive down costs and charges (including hidden fees) and increase return. Annuity rates could improve?
Maybe, maybe not. Young people have student loans to pay off, sky high rents to cover while also trying to save for a mortgage. While retention rates for AE have been much higher than expected, this might change. Especially if people think it is not going to be worth it. Current investment assumptions could prove to be optimistic. The industry is very good at side-tracking attempts to cut its charges and annuity rates could remain the same for decades.
So let's keep the 34% of income figure. It's a good enough guess as any I think. Now, should the union be arguing with employers to be paying, say, 26% employer pension contributions and employees 6%? I can imagine the response. Let's face up to it – defined contribution schemes are just not going to deliver.
But why is it some of my union members still belong to a good-quality, national, career average defined benefit schemes, whose total cost for future actuarial is capped at 18.5%? With the employer contribution a maximum of 13%? Surely it's time to think again about modern defined benefit schemes?
John Gray is a London Borough of Tower Hamlets Pension board member though he is writing in a personal capacity
Posted by John Gray at Sunday, May 01, 2016