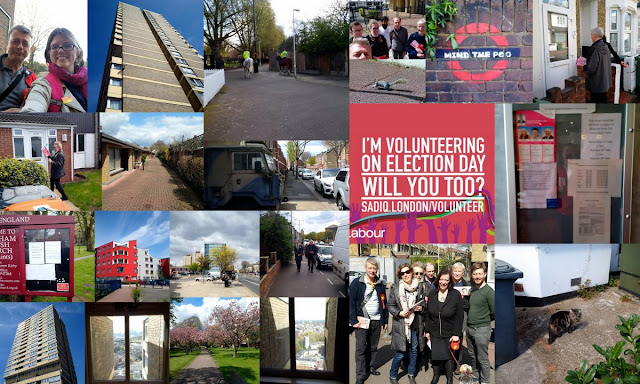 The day started with some family political scandal via LinkedIn, my lovely sister-in-laws' current husband, has just defected as a North Wales Councillor (and former Mayor) from Plaid Cymru to the Conservatives. No further comment.

Other than that a busy Labour movement day. Today I had UNISON meetings with members at Stratford, Islington and Bow (yesterday in Guildford, Dorking and Merton). This evening I was calling at previously identified Labour supporters in Forest Gate North ward, Newham with local Councillor, Rachel Tripp.

We started off by bumping into a very strong minded resident, who I knew well when we both worked for Tower Hamlets Council and Rachel knows as a Councillor, who assured us that our Labour Mayoral Candidate, Sadiq Khan, had his second preference vote (his first preference was not Tory).

It is actually good fun calling on identified Labour supporters during the eve of poll. You can be less formal and more relaxed but need to be careful, since sometimes previous canvassers have got the voter identification spectacularly wrong.

Most of the photos in the collage relate to recent canvass sessions in West Ham ward (where I am a Councillor) with our local MP, Lyn Brown.

Last night I spoke at the lobby in a House of Commons Committee room on behalf of UNISON against the Tory Housing and Planning Bill (post to follow). Afterwards I went to watch the debate on the bill from the public gallery. Sadiq Khan was there in the chamber to support Labour MPs who were attacking the Bill and supporting the House of Lords amendments to this obnoxious and disastrous bill.

Instead of campaigning for himself, he was in the House of Commons to support and vote against a bill that will steal homes from Councils, get rid of tenant rights and force low to middle income Londoners out of the capital.

Tomorrow is a chance for ordinary Londoners to make a stand and elect a Mayor who will represent all of London and not just posh old Etonian multi-millionaires.
Posted by John Gray at Wednesday, May 04, 2016