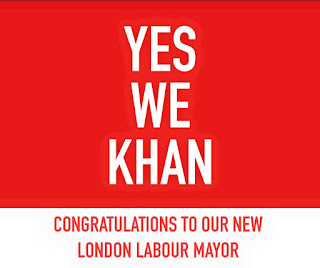 I am so pleased and chuffed that Sadiq has been elected our Mayor for London with 1.3 million votes. I am also proud that Londoners have clearly rejected the vile and racist smear campaign that Tory candidate Zac Goldsmith, his advisors and some of his supporters have run.  Following post election comments made by some leading Tories it seems that this view was shared by even them.

The behaviour of the "Evening Standard" was also dreadful. Why do we have such an awful gutter press?

To me the 3 chief policies I look forward to Sadiq pursuing are :-


1. Ordinary Londoners now have hope that they and their children in the future can actually afford to rent or buy a home in the capital.
2. No more inflation busting bus and rail fare rises either
3. Making sure that we have a real Community Police Service that respects and protects all Londoners.