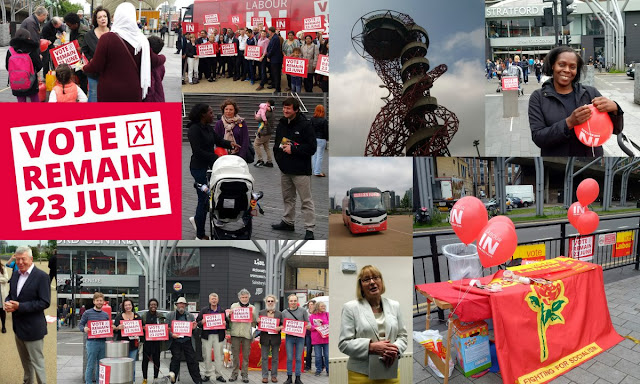 Last Thursday we had London Labour MEP, Mary Honeyball talking to the West Ham Labour General Committee and taking questions about the Socialist case to vote remain in the EU referendum.

Sunday lunchtime the Labour Party "Labour In" Battle bus came to the Orbit in the Queen Elizabeth Olympic Park in Stratford.

Alan Johnson MP together with London MEPs spoke to activists about the economic importance of staying in the EU and protecting workers rights.

On Bank holiday Monday, West Ham CLP had over 15 activists, led by Lyn Brown MP, outside Stratford Station, handing out leaflets (and balloons) and putting the case for "Remain".

By coincidence, I met up with road sweeper, Rab Smith,  who I used to work with in Tower Hamlets and is a longstanding UNISON activist and we had a really good conversation about the annihilation of employment rights if we leave Europe and the prospect of 4 years of Tory/UKIP rule.

I think one of the best things we did that day was to explain to young people how easy it was to register to vote on their smart phones. Just google "voter registration" and if you have your national insurance number,  you can do it in 5 minutes. (By June 7 - but don't delay)
Posted by John Gray at Tuesday, May 31, 2016