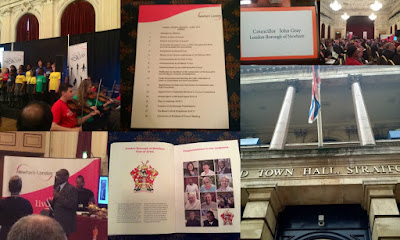 Yesterday evening the official Council AGM took place at the main hall of the Old Stratford Town Hall. It started with local primary school children choir and band. I believe that they played a Soviet Red  Army marching song which always goes down very well in Newham!

Next, Council members elected the Chair and Vice Chair of the Council for the forthcoming year and agreed the appointments of chairs of Committees.

Then there was a "Freedom of the Borough" Presentations to 10 New Alderman/Alderwomen who have given public and civic service to Newham.

The Newham Young Mayor was thanked for his term of office and the meeting ended with the Mayor, Robin Wales, giving his annual report and work plan for 2016/17.

This was followed by reception in the Council chamber then late night drinks in the King Eddies.