"Remember the dead but fight for the Living": Workers Memorial Day 2016 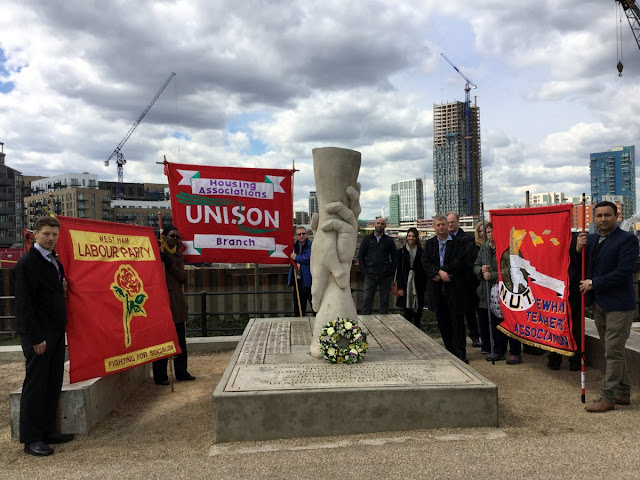 UNISON NEC Member John Gray (and Newham Councillor) spoke to the gathering about the “50,000 workers who die each year in the UK from either accidents or work related ill health. That is 1,000 workers each and every week that die prematurely. The vast majority of these deaths were completely avoidable”.

Tony Power, who works for a local Housing Association in Stratford reminded them about the tragedy that occurred on this site in 1901 that the “clasped hands” monument remembers.  “A worker was repairing a ventilation shaft when he was overcome and collapsed due to fumes. Three of his fellow workers sacrificed their lives by trying to pull him out but they were overcome by fumes as well and sadly died”.

Newham Councillor, Obaid Khan, thanked the Newham trade unions and NUAA for organising this important event.
Posted by John Gray at Tuesday, May 03, 2016