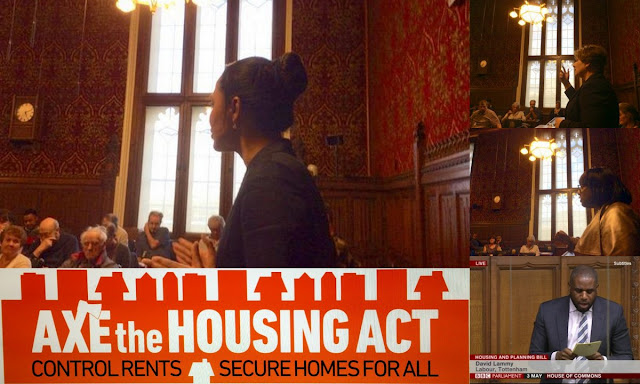 Picture is from the Defend Council Housing lobby against the Housing and Planning Bill in the House of Commons earlier this month. A number of MPs, Lords, Tenant representatives, campaigners and trade unions came to speak at it.

I was late due to a union commitment and missed Labour Leader, Jeremy Corbyn, but managed to hear Bethnal Green MP, Rushanara Ali, call for unity in order to oppose the bill. Later Diane Abbot MP, spoke about the need to build more and more Council Homes as the only real solution to the housing crisis, while Emily Thornberry described the housing misery of so many of her constituents, which is why she is known as the "Housing, Housing, Housing MP".

The Bill will steal homes from hard pressed Councils to pay the Tory election bribe on Right to buy for Housing association tenants and it will double or triple the rents of many social tenants who work and likely to result in mass evictions.

I spoke later on why UNISON is so opposed to the Bill. Out big issue is where will low paid families and key workers be able to afford to live in the future?

Not only do we have around 100,000 trade union members who work in social housing but we have 1.3 million predominately low paid, female members, many of which cannot afford a decent home to buy or rent. A recent survey found that a third of our members had grown up children still living with them and now twice as many live in private rented accommodation as in the social rented sector.

After the lobby I went to watch in the gallery the actual debate on the Housing Bill in the House of Commons. I saw Labour and other opposition MPs rip the bill to pieces and completely out of touch rich Tory MPs try to defend it on the grounds that it will benefit families who earn £100,000 per year!

The Bill is now law and despite some concessions is still vile. However, it does not come in force until next year and the Government will have to return to Parliament for approval on regulations etc so there is still time to campaign, oppose and axe!
Posted by John Gray at Friday, May 27, 2016