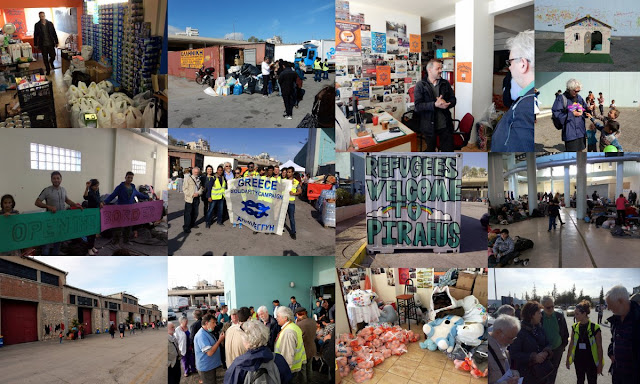 This is a  late post on a 3 day delegation visit I went in March to Athens with the Greece Solidarity Campaign (GSC). The GSC is an independent campaign and non-party political organisation, established in response to an appeal by Tony Benn in February 2012 for solidarity with the people resisting ‘austerity’ in Greece. It is supported by the TUC and has a number of affiliated organisations and individual members. The GSC have run various delegation visits to Greece in recent years but the theme of this visit was about "Local Government". I was interested in this as both a local Councillor and also a public service trade union activist.

All members of the delegation arranged independent travel and accommodation and we met for the first time on the Sunday in a hotel in the centre of Athens. The delegation included trade unionists, Councillors, supporters and Jon Lansman, the National secretary for Momentum. David Lammy MP arrived the following day.

Our first visit and tour was to a Solidarity Centre, which was set up for and run by unemployed Greeks. It began in 2012 and now supported 200 families. It helps with food, legal advice, chemists, education and training. It is not a "charity" and all members have to volunteer for at least 4 hours and have to attend monthly meetings. Focus is on the out of work. 60% are unemployed. 30% have inadequate pensions and the remaining 10% inadequate income for other reasons.

As well as supporting Greeks hit by austerity they are also now collecting food for  refugees. "Solidarity for all" is their slogan. Their motto is the best way to show solidarity - is to do it.

The kitchen in the back feeds refugees. But the refugees do not want to stay in Greece and tend to head out for "Macedonia and Germany".  Due to the border restrictions more people are staying longer (the restrictions have since become far worse). Greece is in danger of becoming a "deposit of lost souls". 75% of Greeks are supportive of refugees and show solidarity but this could change very quickly. See the rise of the fascist and racist Party "Golden Dawn".

Next we went to the Commercial Port and the E1 passenger terminal.  The terminal was a make shift refugee camp. Despite the efforts of volunteers the conditions were pretty shocking. Families and young children were sleeping on blankets over concrete floors. The children were making the best of it and playing games while their parents looked desperate and exhausted. Some of us also visited a former warehouse across the road which was also being used to house refugees. The conditions were even more appalling here being overcrowded, dark and dank. Many of our delegation were openly upset at what they witnessed. I for one never thought that I would ever see scenes like this in modern day Europe.

We met some of the young volunteers who included refugees themselves from Syria and Yemen and a British student helping out during her gap year. The volunteers worked 6am to 6pm shifts, 2 days on and 1 day off. Other volunteers handed out clothing and food while off duty Greek hospital doctors and nurses ran an emergency medical clinic.

The refugees wanted to tell us their stories. Horrific tales about suicide bombings and killings, the fear of drowning when crossing the sea, the uncertainty and worry about their future.

One of our guides explained that despite the poverty and economic hardship in Greece, ordinary Greeks still supported the refugees because so many of them were once refugees themselves because of past war and conflicts. He asked the British people to think that who knows, one day they might well be refugees and need help and support.

On Sunday 17 July I will be attempting to complete a Olympic distance triathlon to raise funds for the GSC and for UNISON Charity "there for you".

You can donate to the GSC here (drop me an email to let me know) and/or to There For You on the "Just Giving" page I have set up.
Posted by John Gray at Monday, May 30, 2016