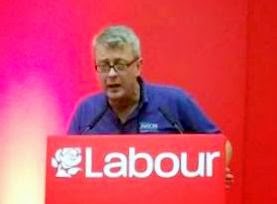 Yesterday was the London Labour Conference 2014 which took place at Hammersmith Town Hall. I will post in more detail on the conference later this week but the picture is of me addressing the "Question Time  with London's MPs, MEPs, AMs and Cllrs" panel in the main hall.

"Conference, Panel, John Gray, UNISON delegate and Chair of the London UNISON Labour political fund, asking about the governance arrangements of London 3rd sector  organisations such as Housing Associations and Charities who are nominally independent but in fact are hugely dependent on public funding, direct or indirect.

Some of whom act in undemocratic and unaccountable ways, such as the London Housing Association called Catalyst, who is currently trying to de-recognise UNISON while also refusing to speak to the union, those who give their senior executives huge pay rises and those who have no meaningful resident or client input in the way they are run.

What can be done to make such organisations in London accountable, democratic and transparent?

Val Shawcross replied that she when she became an Assembly member she was astonished to find that there was some 500 separate Housing Associations in London. Some of them are run well and have tenants on their board but she has concerns about others over issues such as fire safety and diversity. A future Labour London Mayor should make positive progressive requirements over the sector. We may have lost sight of this due to the massive problem of supply.

I had some interesting conversations afterwards and offers of help with the Catalyst issue which I will take up if needed.

For further information on the Union busting by Catalyst click on its name in "labels" under this post.