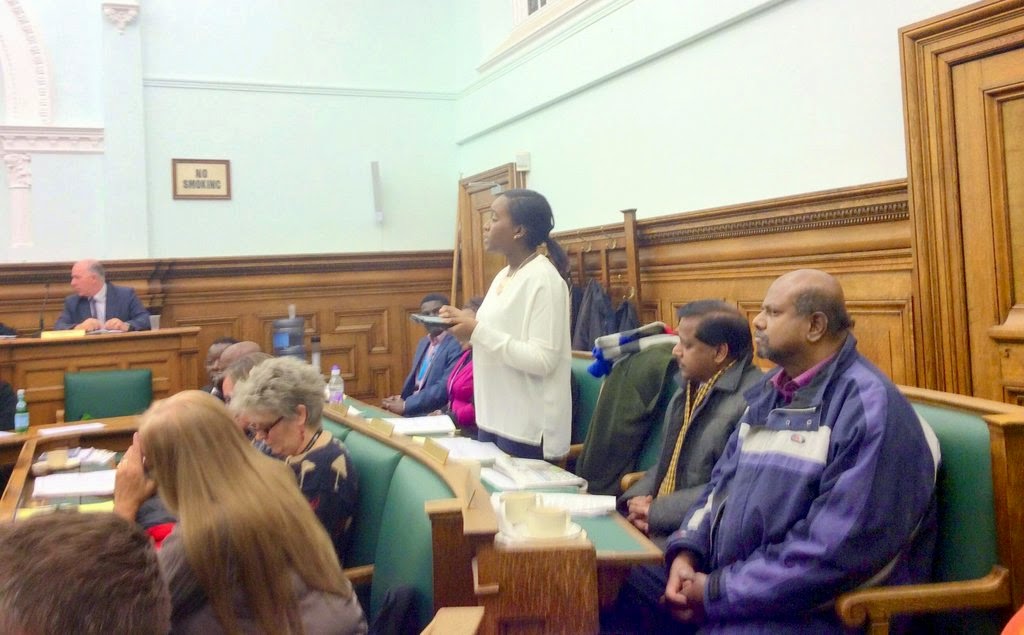 Thank you Chair and good evening to my fellow Councillors and the Mayor.

To be elected to this Council as a Labour representative and stand here speaking in this chamber is a great honour. To be elected as the first young black woman by the residents of Forest Gate North, the ward where I grew up is also a very personal honour.

For my Maiden speech I would like to draw members’ attention to the recent anniversary which spanned across a month with celebrations and educational activities galvanising many members from different communities including those from Newham. I’d like to also remind members of the importance of celebrating our diversity and shared heritage in Newham.

October 2014 marked the 27th UK Black History Month - a significant milestone in the progress towards achieving racial equality in this country.

Seizing the opportunity to discuss Black and world history and honouring the too-often neglected accomplishments of black communities is what inspired me as a young Black female growing up in Newham.

It is this that has helped me forge my own strong British Nigerian identity - and has provided the grounding, knowledge and confidence to stand here this evening talking to you all.

Living in Newham means we have luxury of not having to travel the whole world to learn different communities’ heritage we do this every single day. Whether this is taking part in an Iftar, celebrating the birth of Jesus at a local church, enjoying a delicious Jerk Chicken and rice and peas meal at Stratford Theatre Royal, shopping in Green Street, or visiting the beautiful Hindu temples in East Ham.

Newham has the highest proportion of Black and Minority Ethnic residents of all the London Boroughs from ALL parts of the globe. What an opportunity and advantage this gives Newham in this 21st century!

And there are so many talented, pioneering black people living or who have lived in Newham that have gone on to achieve fantastic things including black actors Idris Elba from Canning Town and Chiwetel Ejiorfor from my Community Neighbourhood Forest Gate. Black British Athlete Christine Ohuruogu MBE, Black Rapper Kano and Mr Benjamin Zephaniah one of my favourite English writers.  I remember reading Refugee boy in my English class at Sarah Bonnell and couldn't believe he was living in Newham!

The thing that makes me really proud of Newham is its offer to all people to learn from the rich tapestry that is our diverse community Newham Heritage week. I think is fantastic and believe it is important for residents to have opportunity to not only learn about their history but about the history of other communities as well.

Moving forward I strongly believe it is important to build on Newham Hertiage week. My ambition is to ensure that IN Newham, BHM and Newham Heritage Week becomes an explicit, whole community focal point, especially at a time when the deceitful UKIP's rhetoric on immigration is becoming so divisive.

I feel it is even more important for us as local politicians to promote and maintain community relations through discussions on diversity and culture and their significant contributions to
our shared Newham heritage, our future and our society in many many enriching ways.

It is apt that the Borough's Coat of Arms proclaims "Progress with the People" - and for me this underpins our Community Resilience agenda, as it recognises that our strength comes from those around us and the community we belong to.

By understanding each other’s heritage we break down barriers and help combat isolation and marginalisation thus promoting a sense of shared identity and place.

And I would therefore like the Council to join me in committing ourselves over the next four years to continue to instill this dimension of Community resilience in all our community neighbourhoods.

To encourage our libraries, key stakeholders, schools and each other to celebrate and be proud of all of Newham's diverse heritage not just in specific months but throughout the entire year".
Posted by John Gray at Wednesday, December 10, 2014