Why do the Tories love the financial services industry? Follow the money... 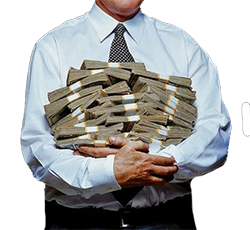 "The latest figures from the Electoral Commission reveal that in the last quarter, hedge funds gave the Tories £1.34 million in donations, bringing the overall total to £51.1 million. These are, of course, the same hedge funds which were given a tax cut worth £145 million by George Osborne in 2013.

A further analysis shows that almost £3 million of donations in the last quarter came from donors who have attended exclusive private dinners with David Cameron and other senior ministers, taking the total to £7.7 million from dinner donors in 2014.

Shadow Cabinet Office minister Jonathan Ashworth said: “The Tory election campaign will be funded by those who dine exclusively at the PM’s top table and a select few in the hedge fund industry. They have been given tax breaks while hard-working families are struggling to make ends meet. The Tories are standing up for those at the top at the expense of working people across the country. Whether putting private profit before patient care in the NHS or siding with the energy industry over consumers struggling with the cost-of-living crisis, David Cameron stands up for the wrong people.”

Contrary to David Cameron’s 2010 election pledge, the Conservative party still relies heavily for its funding on individuals and companies associated with asset management. The most recent donations include: just under £303,000 from Michael S Farmer of RK capital management; over £260,000 from James R. Lupton of Greenhill; £176,000 from Christopher Rokos of Brevan Howard; and almost £112,000 from Andrew Law of Caxton Europe Asset Management. But given that Conservative party membership has fallen by over 100,000 since Cameron took over as Leader, it is small wonder that he is relying on a small pool of mega rich donors who can buy access to ministers. The latest figures show that they amount to 40 per cent of all party donations, up from 25 per cent in the quarter starting from April this year.

In June, in response to a question from Labour and MP and Tribune columnist Stephen Pound, Cameron promised to publish the results of Lord Gold’s inquiry into the cash-for-access scandal. He still has not done so. No surprise there, then".