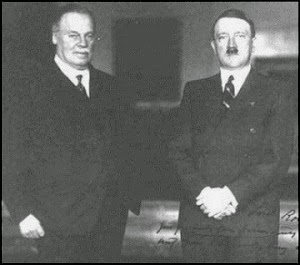 "It has been announced that December 28th is from now on to be the day when we should all remember that just prior to the Second World War, English newspaper the Daily Mail was actively supporting the Nazi dictator Hitler.....

The decision to have a special day to remind people that behind the Mail’s paper-thin facade of middle class respectability lurks a creepingly foul fascist cesspit has been in the pipeline for a while, but finally came to fruition following the paper’s story today about the Queen’s correspondence with former nutter and cannibal Idi Amin.

The Daily Mail sees fit to be critical of Queen Elizabeth’s official communications with Amin in the seventies, seemingly oblivious to the fact that a mere 40 years before they were themselves sucking at the bitter Aryan teat of the man who sent millions to the gas chambers.

In case anyone has forgotten, the Mail’s owner Lord Rothermere published a famous editorial titled “Hurrah for the Blackshirts” in the early thirties, and in 1934 flew to Germany to offer Hitler his support. Incredibly, this sort of thing is hardly ever mentioned in the Daily Mail these days.

Based on the breathtaking hypocrisy of the Daily Mail in just about everything it does, it seems appropriate to choose a special day when the paper’s previous support for fascism can be remembered, commented upon and widely used to annoy current readers.

It is expected that this day will henceforth be a festival of national celebration of tolerance, understanding and ridicule of shit journalism. Schoolchildren are to be encouraged to produce their own spoof newspapers attacking immigrants, gays and cancer, and there will be bunting.

In conclusion, please join with us, readers, in celebrating December 28th as “International the Daily Mail supported Hitler” day!"
Posted by John Gray at Sunday, December 28, 2014