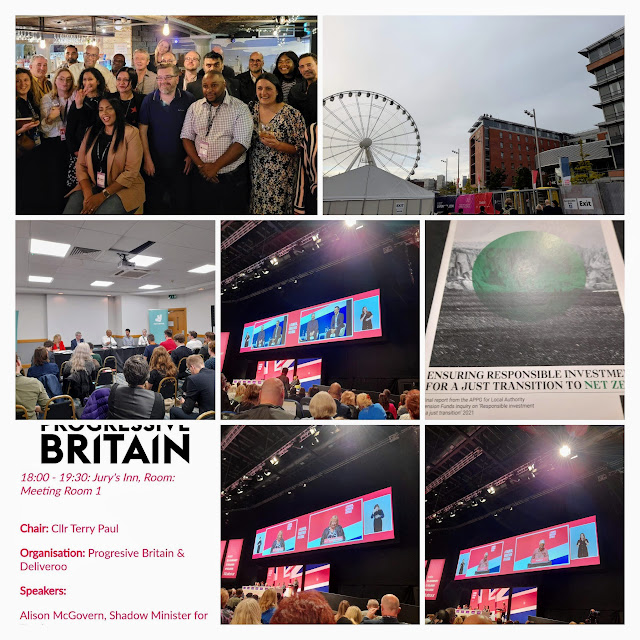 Another rather random collection of photos from Day 2 of Conference. I posted here on my early morning run and seeing some well known local lads

Top left is a picture from "Newham Night" when delegates and visitors from Newham met up for a drink and gossip at a local bar.

Next was a picture of the Police on top of my hotel roof looking out, I assume, for possible security threats.

Then pictures from an interesting fringe chaired by my Councillor colleague "Red Terry" Paul on the new trade union recognition agreement between Deliveroo and the GMB.

As a delegate on the conference floor, I enjoyed the panel session with Keir Starmer and former England footballer, Gary Neville. I am not a football fan and had little knowledge of Gary before this but he seemed an intelligent and thoughtful bloke.

There was the LAPFF fringe on Climate Change and Just Transition that I spoke at and have posted elsewhere. Final pictures of some great speeches by my General Secretary Christina McAnea and my London UNISON colleague, Anu Prashar.

I also had a tasty evening meal at the Labour Friends of Bangladesh event and one or maybe even two whiskeys at the wonderful Labour Irish reception.