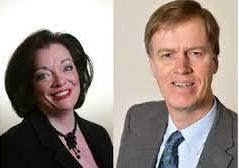 "The collective failure of society and government to protect children from criminal exploitation is contributing to a terrible toll of murdered youngsters, traumatised families and ruined lives...

....The government’s failure to tackle the cost of living crisis has heightened the dangers children face from grooming and exploitation by criminal gangs.

Abusers seeking to lure children into running drugs thrive on the deprivation that so badly scars our society. So much of this vile criminal activity is linked to the supply of drugs along county lines, to suburban areas, as well as to market and coastal towns.

Here in London, we have lost so many children to grooming and exploitation and gang violence in pursuit of profit. Throughout 2021, 30 teenagers are reported to have been killed in London alone, and this is just the tip of the iceberg. Then there’s the abject devastation and misery for families of children caught up in the criminal justice system after being groomed and violated, with life chances lost and years wasted in prison.

Youth violence is on the rise, with the Metropolitan Police warning that England could see its highest number of deaths by knife crime in over a decade. The London borough of Newham, made up of our respective constituencies of West Ham and East Ham, has faced a terrible toll of murdered children and grieving families.

As Newham MPs, we have repeatedly raised cases of children whose lives have been ruined because of exploitation by gangs. It’s abundantly clear the current approach is failing vulnerable children across the country and devastating our communities. The under-funding of youth services over the last 12 years, along with the closure of hundreds of youth centres that provided safe spaces for children, has weakened communities’ ability to protect young people from harm.

Meanwhile, the cost of living crisis is increasing the risk to children from criminal exploitation. Experiences of child poverty increase the attraction of the “alternative economic model” that groomers offer.

An extraordinary rise in food bank use, a dire lack of adequate and affordable housing, poverty and racism, all increase children’s vulnerability to grooming. On a daily basis, many children today see their parents working several jobs and still struggling to pay rent and buy the basics. They can see that there is no money, and they are highly motivated to make this easier on their family in any way they can.

That’s why there must be no soft-touch approach when it comes to protecting children and young people from gang grooming. Existing policies are failing these children, who are not being identified or properly supported early enough.

As MPs for communities blighted by grooming, we are seeking support for a blueprint to overhaul the way public services protect child victims of criminal exploitation. At a recent conference, titled “Solving youth violence”, we sought to bring together those working in children’s services, as well as the police, charities and academics.

From our findings, we have produced a prospectus to improve protection for children from grooming, which we hope will open a debate. We will now present these findings in the Commons, with thanks to the chair of the Home Affairs Select Committee, Diana Johnson MP.

We believe there must be an early warning system, covering all social media firms, from Twitter to Facebook, with the introduction of a legal duty on firms to report any suspicious activity linked to possible grooming to the police the moment they become aware of it.

It’s not too much to ask that children and young people receive the same level of legal protection as the financial sector, where banks have similar duties to report suspicions about money laundering.

We want to discuss so-called “burner phones”, temporary phones that are discarded soon after use, which have been routinely used in reported cases of grooming and child criminal exploitation by gangs. These unregistered phones are a core tool used for county lines groomers and exploiters to obstruct detection and investigation of their crimes and to escape justice. People buying a mobile phone should be required to provide their name, address and contact details before they can start using it.

Meanwhile, immense pressure on public services, schools and local authorities to fulfil their duties while under-resourced, weakens protection for vulnerable children. This means that cases of exploitation are often missed and that even when the right referrals are made early, the specialist support required cannot be provided by partner agencies in a timely or consistent manner.

These are just a few of the changes needed. The collective failure of society and government to protect children from criminal exploitation is contributing to a terrible toll of murdered youngsters, traumatised families and communities, and ruined lives. However, the new prime minister and her government now have the opportunity for a fresh start. Liz Truss could introduce these new protections for our children in a matter of weeks.

There can be no excuse for failing to act to protect our children.