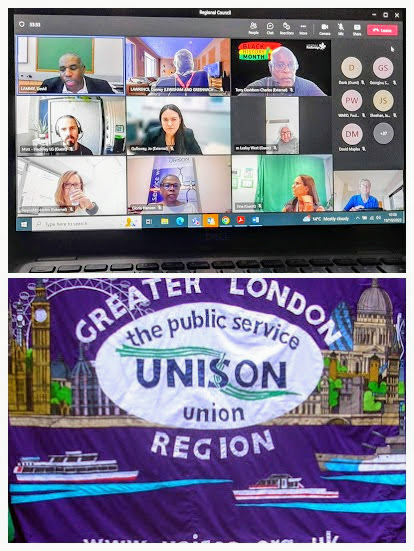 Last week I had to "last minute" chair the virtual Regional Council meeting of UNISON Greater London Region. Our Regional convenor, Yvonne Green, was on holiday in the Caribbean and had tried to join the meeting to chair (despite being silly O'Clock over there) but had internet problems. Our deputy Convenor, Conroy Lawrence was our delegate at  the physical TUC conference.
The meeting was held virtually due to requests from our NHS/health branches, since they are in the midst of the industrial action ballot on pay and are working their socks off to get a good turnout and hopefully, a positive result in favour of industrial action.
So, as Regional Finance Convenor (one of the 5 elected regional Council Officers), I stepped in to Chair. Our keynote speaker was Shadow Foreign Secretary, David Lammy MP, who gave a passionate Parliamentary report on the utter shambles that was the Truss Premiership (this was just before her very welcome resignation).
Next speaker was NHS nurse, James Anthony, Vice Chair UNISON Campaigns Committee (formerly the General Political Fund/GPF) on the new "campaign fund", the programme of work to raise the profile of the fund, in particular increasing opt-in and using the fund more strategically and efficiently.
Final speaker was our Regional Secretary, Jo Galloway, on the new "branch organising and support fund" which is also a really important financial tool to support branches in campaigning.
As a member of a regional wide branch that has multi employers with a fragmented membership this fund is exactly what we and many other similar branches need. It will also benefit all other branches that have good ideas and strategies to grow our membership.
Since the meeting was as expected inquorate (due to NHS/health branches concentrating on the pay ballot) we had a useful and wide ranging Q&A on the new fund. I closed the meeting afterwards.
I felt it was a useful meeting but I look forward to the next physical meeting of Regional Council (but in this current climate there may well be further massive disputes - so watch this space)
Posted by John Gray at Sunday, October 23, 2022