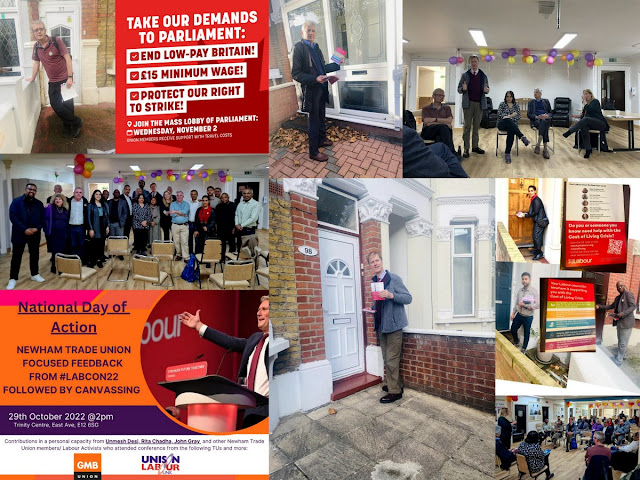 Yesterday was a bit busy. In morning I helped out my UNISON branch to empty its office in Holloway Road then in the afternoon, I was a panel speaker at an informal feedback session in Newham to talk to Labour Union members on the recent Labour Party Conference in Liverpool.

Well done to Panel Chair (and organiser) Liz Booker and my fellow panelists Unmesh Desai (our local London Assembly member and GMB activist) and Rita Chadha (Community) for their excellent presentations. There was a wide range of people in the audience who challenged us with really good questions and comments. Local East Ham MP, Stephen Timms, spoke at the end with his thoughts on Conference and "recent" political events.

In my introductory remarks I described what I believe the unions want from the Labour Party (win power at Westminster to protect us from hostile judges  and employers!) and also how I became a UNISON Labour Link delegate at the recent conference and what we did as delegates.

I told my very favourite quote from former TGWU  union leader, Jack Jones, who when he was asked if could ever imagine the unions becoming divorced from the Labour Party, he replied "Divorce? Never. Murder, often"

After the feedback, we were split into 2 canvass teams and I went out in East Ham to speak to residents with Stephen and all the 3 local ward Councillor members. On the whole it was a very positive canvass and residents seemed pleased to see us coming to them, knocking on doors and speaking to them.