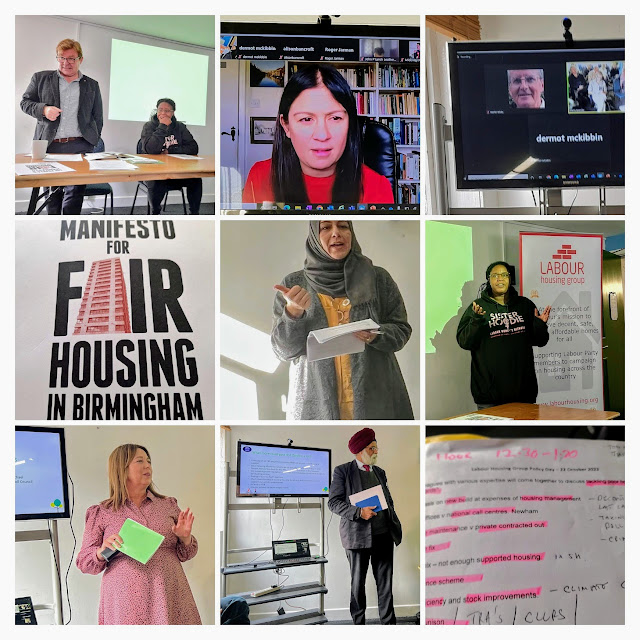 Today I travelled to Birmingham to attend a policy day organised by the Labour Housing Group. There was a number of excellent speakers including Shadow Secretary of State, Lisa Nandy MP. She pledged that a future Labour Government will introduce a Private Renters Charter & decent homes standards in it’s first 100 days. It will also abolish S21 evictions & the feudal leasehold tenure.

Salma Hamid from the Birmingham Fair Housing Campaign gave a passionate speech on their campaigning & research on really poor standards in the private & public housing sectors for decent standards & their fight on behalf of tenants for decent rights.

Before lunch there was workshops on housing standards in Social Housing, PRS (Private rental sector) and Owner occupation. I moderated the workshop on Social Housing.

After lunch there was a talk by Cllr Kerrie Carmichael Leader Sandwell Council & Housing lead Cllr Charn Singh Padda on the difference a Labour council is making on housing standards, tackling homelessness, new homes & retrofitting despite challenges on funding.

Next was Martin Wicks, from Labour Campaign for Council Housing. Who made it clear what Council tenants such as himself expect Labour Councils and future Labour Governments to deliver upon housing standards. He is still waiting for a modern bathroom after many decades.

There was then a brief summary from the moderators of the workshops. I gave a summary of the lively and thoughtful one on Social Housing.

Final item was the launch of the West Midlands branch of the Labour Housing Group whose inaugural meeting takes place next month.

This was an excellent day. Many thanks to our speakers but also to our LHG Chair, Cllr John Cotton, and all the executive members of the LHG who have spend so much time and energy organising such events.