Labour Conference: Day 3 A Green & Digital Future debate - My speech "No jobs in a dead planet" 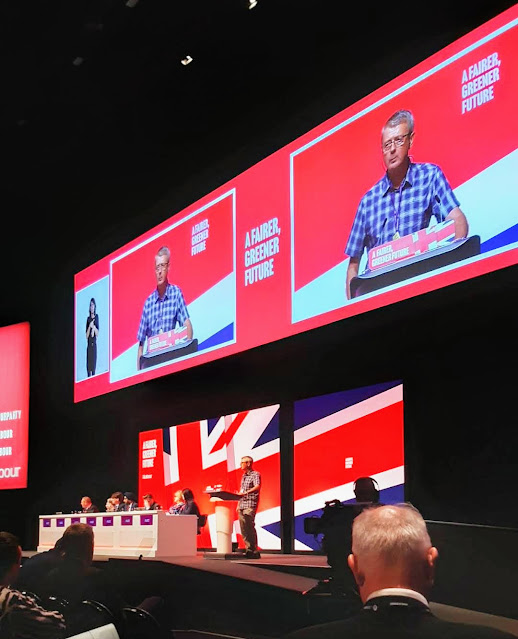 This is photo from Tuesday morning (Day 3 of Labour Party Conference) of me giving a speech to Labour Conference as a UNISON Labour Link delegate. It was during the debate on Climate change. It was titled the "decarbonisation of public services".  A bit of a mouthful but hopefully I got my point across. Many thanks to UNISON staff for speaker notes. Hat tip Julian Cooke for photo.
Check out here on Labour Party YouTube https://www.youtube.com/watch?v=F9-TW2vii0Q and go to 1 hour 39 minutes & 25 seconds
DECARBONISING PUBLIC SERVICES

Conference, John Gray speaking for UNISON, the UK’s largest trade union. Conference let’s be clear we don’t need any persuading that climate change is real, is dangerous and is destructive.

We know that there are no jobs on a dead planet. And if the transition to net zero is not just, it is working people and their families who will suffer the worst consequences.

And Conference, the breadth of our public services means that UNISON members see the effects of climate change at work. Whether working for the Environment Agency and local government at the time of flooding, or NHS staff seeing the rise in air pollution and asthma.

And we all know the impacts of pollution and climate change fall more heavily on the disadvantaged.

Conference, trade unions must play a central role so that workers voices are at the table. That way we will deliver the policies and measures that ensure the transition is fair. This is a once in a generation challenge that we have to rise to. And as part of this endeavour We know that decarbonising public services is key.

I could give similar examples across the rest of the public sector but the Chair would agree that there isn’t enough time in this speech!

Conference, In the absence of a significant capital injection of funds, public services will only move slowly towards its decarbonisation targets, taking resources from already stretched budgets, with disastrous consequences.

So, Liz Truss, Your government needs to start the funding NOW! But also, I say to our Labour leadership Public Services must have a separate, significant additional climate and decarbonisation budget .And there must dialogue with trade unions on this issue NOW.

Conference, if we get this right with such ambitious plans Labour will win the next election. Thank You.
Posted by John Gray at Tuesday, October 04, 2022