"Levelling up net zero:How can we invest in a fair and just transition" Fringe #Lab22 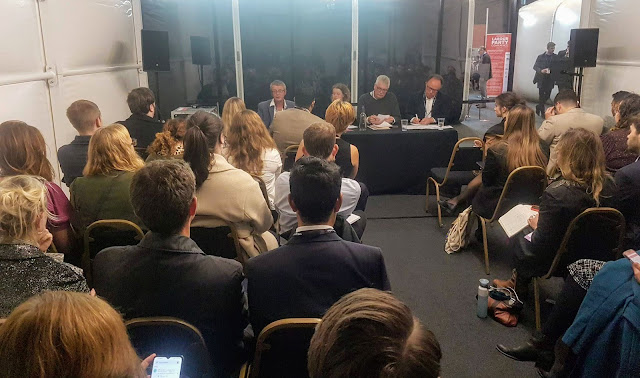 This is the presentation I gave on Monday at the LAPFF/the Smith Institute fringe alongside panel speakers, Olivia Blake MP and Professor Nick Robins. Chaired by Paul Hackett. Many thanks to Paul Hunter from PIRC for speaker notes.

"First for context a bit about me, I am John Gray a councillor in Newham, East London and Unison rep and through these roles I have been involved in local government pensions for a number of years.

This includes being vice-chair of the Local Authority Pension Fund Forum (LAPFF), which is a membership organisation representing over 80 public sector pension funds and investment pools.

Together our members have over £350 billion of assets under management and have holdings in many of the largest companies within the UK but also globally.

And across our pension funds, there are millions of scheme members who serve or have served our communities who rely on our investment funds to provide a pension in retirement. I included.

The role of LAPFF is to protect these pension fund investments by engaging with investee companies on responsible investment issues, including around climate and social issues such as employment standards and human rights.

So why I am here and why as investors are we interested in issues around the environment, levelling up, and social issues associated with the transition to net zero?

For us these issues are not just a matter of good corporate behaviour for its own sake, but also protecting the pension funds that provide for millions of people.

To give an example of what I mean, LAPFF recently visited Brazil to meet communities and discuss with one of the world’s largest mining companies the mining disasters that have happened in South America over the last decade.

These disasters were a human tragedy. Over the period a series of (what are called) tailing dams used in the mining process have failed, submerging people under a wave of water and mud with a significant loss of life, livelihoods decimated, and communities destroyed.

It is impossible not to be affected by stories we have heard by community members.

However, while quite clearly primarily a human disaster it is also an issue for us as investors. We want to act as long-term responsible investors. And when disasters like these happen it not only undermines our purposes as responsible investors, it also comes at considerable costs with reparations and the clean up running into multiple billions of pounds.

And when you look at this example, one of the most galling components was that it was avoidable – safety concerns were raised by workers and communities before the tragedies but were ignored.

I wanted to start with this example not only to show what I mean by the importance of environmental, social and employment standards for long-term investors but also because the mining sector provides a very good case study for today’s discussion.

It is an industry in transition – it is having to power past coal as part of our move away from carbon intensive energy sources and industrial processes.

And it is vital sector for so-called transition minerals – cobalt, lithium, nickel and the like – which are all needed in green technology such as electric vehicles.

Without mining activity for such transition minerals, decarbonising our economy won’t be possible and as long-term investors we face significant market-wide risks from climate change. And at an individual company level we run the risk of being invested in stranded assets and in firms left behind as regulation ratchets up.

In the mining sector we also have a pretty good case study in the UK context of how not to do an industrial transition. We know all to well what happens when we don’t consider the implications for workers and communities and social dislocation that can follow. Olivia mentioned the coalfields in South Yorkshire in the 1980s, I was brought up in industrial North East Wales at the same time while we are of course now in Liverpool, which took decades to recover.

And in the case of mining disasters, the lack of engagement between companies and their stakeholders that I mentioned creates their own set of risks.

Although I have used mining as an example, the transition is likely to have significant impacts across a whole range of sectors – energy, utilities, manufacturing, housing, agriculture, transport – to name a few. While mining in the UK may have declined over recent decades, these other sectors are all large industries in the UK and are all now in period of change.

And in this period of change, if we repeat the mistakes of the past and ignore the social implications of the industrial transition, we will almost certainly create deep-seated opposition to climate action. This morning we woke up to the news that a far right government has been elected in Italy in part due to such fears.

This includes potential opposition within specific communities because of the geographical dimension to achieving net zero.

Carbon intensive sectors are often located in the least wealthy places and regions and so are facing the biggest adverse impacts of the transition.

But, it’s not all doom and gloom. The transition comes with risks but there are real opportunities. We have the chance to create new jobs, support local growth and bolster efforts to level up the country while also helping to avoid the worst effects of climate change.

What this does demand is careful consideration about how we can best support communities as we decarbonise our economy. How we can level up net zero.

As investors we have a role in this: Scrutinising and engage investee companies on how they are approaching the social implications. Understanding how they are engaging workers and communities on industrial change, their plans for retraining and redeploying staff as jobs change and how they are supporting the communities in which they operate through the transition.

But investors and companies can’t do it alone. Government clearly plays the primary role, including in supporting and demanding us to do more. That is why we supported an inquiry into a just transition run by the All Party Parliamentary Group for local authority pension funds and a copy of the report is on our website.

Much of what that inquiry heard suggests there has to be a firm commitment to a just transition from governments. In the UK context there is a strong case for a Just Transition Commission to bring stakeholders together and provide guidance, including on what interventions are needed to support local economies and communities over the coming decades.

As the levelling up white paper mentions, there could be a role for local authority pension funds to invest locally to support growth. But the feedback from our members is that this requires policy certainty. As long-term investors, without certainty it is hard to make local investments in the transition or understand the social implications.

There is also regulation that could help. It is a positive step that government recently introduced rules requiring large companies to consider the risks and opportunities they face as a result of climate change. These TCFD reporting requirements compel companies to disclose this information in a clear and consistent way so investors can understand their financial exposure to climate risk.

However, currently this does not have to include the social risks associated with the transition. Be it push back on their climate transition plans, workforce and skills issues of the transition, the impacts on stakeholders such as communities or managing reputational and operational risks with employers, consumers, suppliers or communities.

Considering the social implications is not an impossible task. Indeed, some companies are already starting to develop just transition plans. Energy company SSE, for example, have a just transition plan covering engagement with workers and communities, making a commitment to decent work and the creation of new low-carbon job, sharing value with communities and having a road map for an orderly and planned transition for their business.

Achieving that orderly transition is not a straightforward task.

We are all too aware of the pressures to water down environmental regulations in the face of the energy crisis.

And I think this an important point to finish on.

More broadly, in whatever role we play as investors, government, politics or civil society, if we don’t consider the social and economic impacts for communities of the transition to net zero, we will face opposition to climate action.

Preventing that ultimately demands that we all play our part, including businesses and the investment community, in ensuring the shift to net zero is part of the solution and not part of the problem when it comes to narrowing economic divides and levelling up the UK".