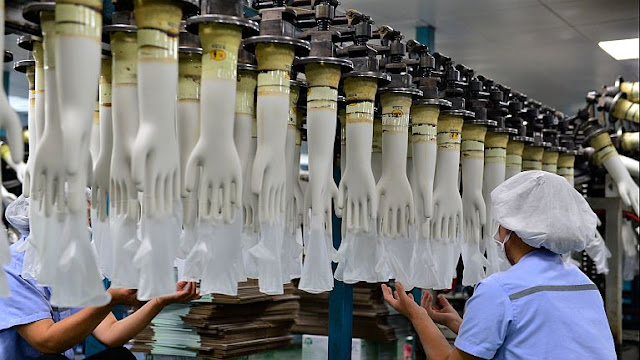 Last week I chaired a virtual webinar organised by PIRC and UNISON on Labour standards in the rubber glove manufacturing industry. There were 6 panel members located in Europe and Asia and an invited audience of  some 50 industry representatives, investors, trade unionists and NGOs.
There was some dreadful horror stories of human rights abuses in many factories that produce gloves for the NHS (and which Local Government Pension Funds may also have investments in).  Hopefully there will be a follow on event soon.
This was my introductory blurb. "Hello everyone and welcome to today’s webinar on labour standards in the rubber gloves industry co-organised by PIRC and UNISON.

Since the start of the Covid-19 pandemic, and the greatly increased demand for personal protective equipment, there has been an increasing focus on the medical rubber glove supply chain. Forced labour, poor conditions and other labour rights concerns have received considerable media exposure.

For investors there has been a bit of a rollercoaster ride. The share prices of manufacturers initially surged on increased demand, but public policy responses brought valuations back to earth. In particular the use of Withholding Release Orders by US Customs and Border Protection to address the use of forced labour had a major impact. In the future public procurement decisions by national and regional public sector buyers may become increasingly important. While the S in ESG is often the poor relation, and is given less scrutiny by many investors, in this case risks relating to poor labour practices has become financially material.

It’s also difficult terrain for investors to navigate, due to differing accounts of the situation on the ground. Companies have tried to improve. On some key issues – such as the use of recruitment fees – a substantial amount of money has been spent seeking to provide redress. Yet workers, activists and unions continue to raise significant concerns.

In this webinar we will hear from a range of experts and organisations involved in improving standards in the rubber glove industry. In the first half we’ll be hearing about ongoing concerns relating to labour practices in the sector.

Then we’ll take some questions. You can put these either in the chat or use the Q&A function.

In the second half of the webinar we’ll focus on some of the policy responses, including public procurement, and the business-led initiative the Responsible Glove Alliance.

Then we will have the opportunity for further questions.

To start us off, Tom Powdrill from PIRC is going to give a very brief introduction to its work on this topic...