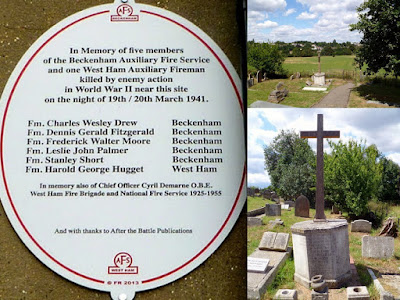 On the 19 March 2021 it is the 80th anniversary of the destruction of a fire engine and its crew due to Nazi bombing in West Ham ward, which I represent as a Councillor. 5 our of the 6 firefighters killed came from Beckenham to help defend London from attack.

There is a plaque on the side wall of what is now the Plaistow café, 163 Plaistow Road, Newham London, E15 3ET.

I brought this anniversary up at a recent meeting in West Ham and it was agreed that we must mark this occasion in some Covid safe way.  I will contact the Borough Fire Brigade commander.

By coincidence a few years ago I was walking in Kent and came across a memorial to these same firefighters in rural Beckenham.