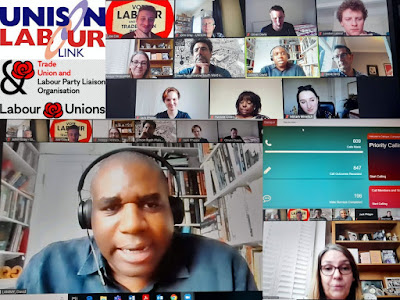 David Lammy MP gave us a quick briefing beforehand on how important it is that we have a Labour Mayor & Assembly in London to protect Londoners against some of the excesses of Tory Government misrule.

He spoke very movingly about why he is such a passionate UNISON member mainly because of the support the union gave to his Mum when she had serious employment issues.

David also made a valid point that while many of us (Labour Party activists) prefer to campaign by knocking on doors rather than ringing people, you probably end up speaking to more people by phone than "on the knocker".

I could only spend 45 minutes last night on the actual phone bank but did manage to gain 7 contacts which is probably more than I would have gathered if I had been knocking on doors.