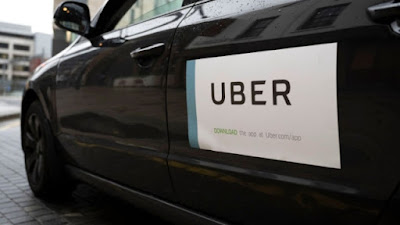 Hat tip I "Late on Tuesday, Uber announced that it would pay the national minimum wage, pensions and holiday pay to drivers.

Now Uber drivers and trade unions are celebrating. A long legal battle and patient organising has paid off. Not only has Uber lost in the Supreme Court, they been forced to respect their workers’ basic rights.

Uber’s PR machine has gamely sought to present these changes as a generous offer to their drivers. The reality is that they were forced into conceding fair terms and conditions by years of trade union campaigning.

For years Uber has claimed it is just a technology business, rather than a minicab operator. It argued that its drivers were self-employed, and so had no employment rights. The courts disagreed – and Uber has been forced to act to give workers the rights they should have had from the outset.

Workers and their unions will scrutinise the small print on Uber’s new offer. It’s already clear that there are significant gaps.

A key problem is about working time: the Supreme Court decided that a driver should be paid for the whole time they are logged into the Uber app and thus available for bookings. But Uber’s changes mean that they will only be paid once they have accepted a booking. We do not believe that Uber should be able to do this.

Uber’s abrupt U-turn is just the latest stage in the battle to ensure that all work – including in the gig economy – is decent work.

Boris Johnson has promised to “protect and enhance” employment rights. He announced an employment bill to do exactly that, in the 2019 Queen’s speech. The proposed legislation has yet to appear.

Meanwhile, the courts keep finding that all workers have rights. But court battles are costly, inefficient and time-consuming. Workers shouldn’t have to go to court to secure their basic legal entitlements.

So the Government should get on with fixing enforcement so that employers know that if they break the law they will be caught. They should legislate for the presumption that every worker has workers’ rights and worker status. Then the onus is on the company to prove they don’t.

And they should give employment tribunals the power to make binding wider recommendations. That will mean that companies, having lost in court, have to implement all of the judges’ findings, and can’t cherry pick. And other similar employers would have to follow the judgement too.

Uber’s court defeat should serve as a reminder: it is not up to employers to decide when protection applies to those who work for them. All workers have rights. And there is no trade-off between rights and flexibility. Just because an individual worker can choose when and if to work, they don’t lose their employment rights.

Gig economy operators often pose as shiny innovative tech firms. But in reality, it’s the same old story. The drivers and couriers idling unpaid, waiting for a booking, are today’s day labourers, assembling at the gates of the factory or dockyard hoping that there may be some work today.

So our message today to Uber, and to all the other gig economy firms that say their workers are self-employed: we are watching and it is our opinion that your employment models are outside the law.

You may be start-ups from the last decade. But we have fought for workers’ rights for a century and a half. Unions are not going anywhere. Treat your workers fairly.

Frances O’Grady is General Secretary of the Trades Union Congress

When it comes to companies such as Uber, people cannot see elephant in the room.

Startup such as Uber received million and billions from venture capitalists, who then use that money to gain market share, eventually float on the stock market, paying the VC back in multitudes. How can you have a company worth billions, but is yet to make a real profit?

American startup such as Uber is an elephant king being carried on the shoulders of an army of ants (the drivers). These companies exploit workers. Once they are dominant, they eventually exploit customers. How else do are they going to give back billion in returns to their shareholders.

Take Amazon, I read about a chap, who sold £40k worth on stuff the site as a third party seller. Eventually Amazon asked him where he got bought the items. Then Amazon started selling the same items cheaper, putting this guy out of business.


I believe in capitalism, but this is distorted. We don't allow state aid of companies, yet the VC are a loop hole in unfair competition.

People who dominate a market, should pay a higher tax, to allow fair competition.