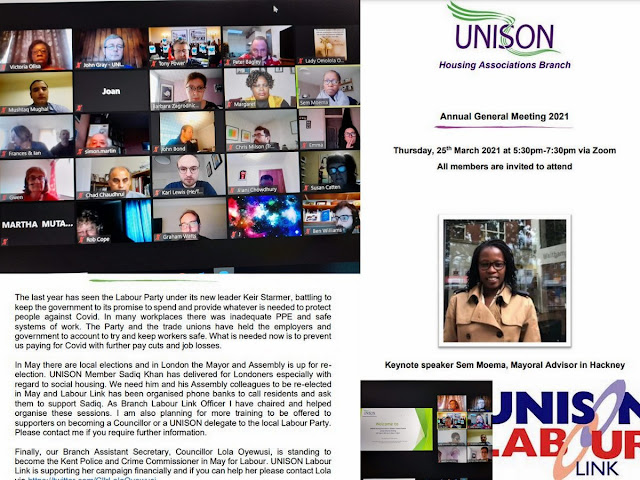 I was really pleased that tonight's virtual AGM went so well. We had over 60 people attending which is far more than we have had in the past attending physical AGMS. Our AGM last year was cancelled at the last moment due to the first Covid lockdown. In 2019 our AGM was held in the House of Commons!

Many thanks to our excellent keynote speaker, Sem Moema, a UNISON member who has worked in Housing Associations for many years and is now the Labour candidate in the London GLA elections in May for Islington, Hackney and Waltham Forest.

As the branch Labour Link officer (I was pleased to be elected unopposed at the AGM) I gave a report encouraging members to get active in the London Mayoral & GLA election by taking part in phone banks or delivering leaflets. I will be circulating Labour Unions events on branch social media. But also we want more of our  branch members to become more active in the Labour Party bringing our trade union values into the Party by becoming Councillors or delegates.

I asked our branch activist Omolola Oyewusi to say a few words about her campaign to become the first ever black Police Crime Commissioner in May. Omolola is standing in Kent and would welcome any funding or assistance.

The AGM also had reports from the Chair, Treasurer, Communications officer, branch case workers, regional organisers and then discussed nominations to vacant committee posts. I moved a rule change motion on organising UNISON committee structures in all our large employers which was passed.

It was really nice to see the positive comments in the "chat box" from members who had never attended a union meeting beforehand but thanked our staff, regional organisers and local reps for all their help and support during these recent dreadful times.