"Talking to the Fabians about committees" 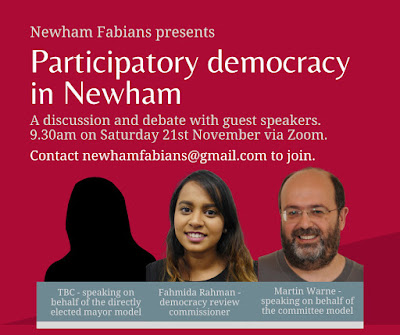 On Saturday morning there was a virtual debate organised by Newham Fabians on "Participatory democracy".

Local blogger Martin Warne spoke in favour of changing Newham's governance from an Executive Mayor model to a "Committee model". Next May there will be a borough wide referendum to decide.

Interestingly it appears that Newham Fabians could not find a speaker who was in favour of the Executive Mayor model. For balance one of its officers gave examples of the positive arguments for the model.

On Saturday Newham Fabians held an online meeting to talk about local democracy and participation. I was invited to talk about the committee model and why I think it’s the best option for Newham.

This is what I said…

Since 2002 Newham has been run by a directly elected executive mayor – for the first 16 years that was Sir Robin Wales; the current mayor Rokhsana Fiaz has served for 2 ½ years.

The referendum in May will be the first time in close to 20 years that residents have the chance to debate and determine how our borough is run. The choice will be between the current arrangements and a modern committee system.

Newham Voting for Change, the campaign for a committee system, is delighted that there will be a clear choice between a council run by a Mayor and a small executive they appoint and a more participatory, inclusive and open system in which every councillor can play a role. We’re looking forward to campaigning for the committee system in the referendum and having the chance to make the arguments about how Newham council should make decisions and agree policy.

So, what is the committee model?

This is the flatter, less hierarchical and more collaborative alternative to having the executive – or strong leader – arrangements we have now.

Under this model, full Council holds all the decision-making powers. It is full Council’s decision whether to exercise those powers directly or to delegate them to committees or to officers. Council can decide for itself how to organise the committees and adapt them over time to meet changing needs.

The London Borough of Sutton, for example, has four main committees that are responsible for the Council’s principal functions. These are:

Full Council appoints a leader, but without executive powers and, of course, they can be replaced by full Council – not an option that exists under our current arrangements.

The council leader provides political and strategic leadership, proposing new policy, strategy, budget and service standards, as well as acting as spokesperson for the authority.

They represent the Council in the community and in discussions with regional, national and international organisations.

Although this is not an issue in our present one-party state, all committees and sub-committees must be politically balanced, where possible.

Research shows that in councils that moved back to a committee system, the role of full council has been enhanced, with more councillors involved in decision-making. Which is a key reason for moving away from a mayor or leader-and-cabinet system.

Why do we believe this the best option for Newham?

Good governance is about more than structures and processes. Political and organisational cultures, attitudes and behaviours are what make systems successful.

We have seen that the concentration of power and patronage in the hands a single individual, and their hand-picked ‘executive team’, has led to groupthink, poor decision-making and a toxic political culture. Although Rokhsana Fiaz has handed back many of her powers to cabinet there is nothing to prevent a future mayor reclaiming them for themselves.

In a modern Committee system, all 66 councillors will have the power to represent their areas and do the job voters believe they are electing them to do.

Decisions will be made by committees of councillors (from all parties, should an opposition ever manage to get itself elected) working together. All of our councillors will have a voice to represent the communities they serve – not just the mayor and their chosen few.

Power and resources for decision-making in local communities can also be built into a committee system. This means more decisions can be taken closer to the people affected.

We believe that the committee system is:

OPEN – there is more opportunity for citizens, experts and communities to have their say and influence decisions

REPRESENTATIVE – all council members have input into decisions, not just the Mayor and Cabinet

CO-OPERATIVE – councillors have to work together to make decisions

And a properly designed committee system will be just as swift for decision-making as the mayor-and-cabinet system.

The socialist case for committees

Socialists know that supporting open, democratic and accountable government is crucial. Our party was established to open up government to working people who had gone unrepresented — so that democracy might be used to improve the lives of the many, not just the few.

I hope the referendum debate can be a starting point for a wider discussion on how to renew our democracy in Newham. As Fabians and socialists, we have questions to answer.

How do we create a political culture based on cooperation and solidarity? How do we rebuild trust in our politics and in our public institutions? How do we build support for and fund high quality, universal public services? How do we become carbon neutral within the next decade, to avert climate catastrophe?

The scale of the task confronting us means that the public needs to be at the heart of deciding how to proceed.

I will finish by quoting Olivia Blake, MP for Sheffield Hallam and a supporter for the campaign for a committee system in her city: “Labour councils should be innovative, pioneering new democratic processes with greater citizen participation and deliberation. And we need to start now. The people are ready for change, and we should listen.”

Newham Fabian Society is the local branch of the Fabian Society, a left-leaning think tank dedicated to new public policy and political ideas that is affiliated to the Labour Party. If you’re interested in finding out more, email the secretary.

From the man who said "Corbyn has passed the leadership test!"
Brilliant...!!

I doubt very, very much Martin ever said this

Did I? When and in what context?