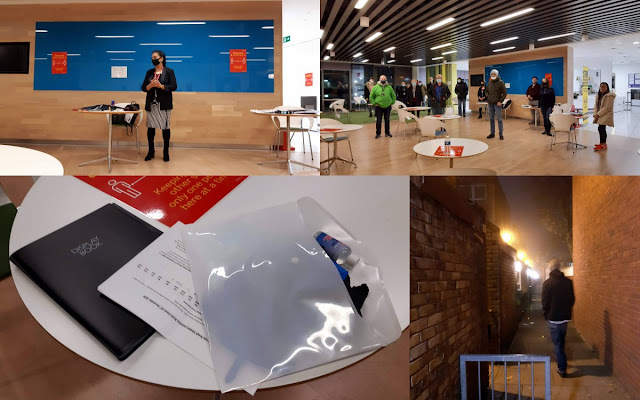 On Thursday evening at 11pm I went to Newham Council Dockside Building, to be briefed and then take part, in the annual survey of the number of people sleeping on our streets. This is a national survey that all councils are expected to carry out that particular night (not sure if only England?).
The weather had turned very cold and for the first time this season, I had to clear my car windscreen of frost/ice before driving to the briefing.

Due to Covid there were only 7 small teams, covering known rough sleeping "hotspots" in Newham. The teams comprised of 16 in total: Council officers, 3rd sector organisations, local volunteers, 4
Newham Councillors and a representative from the Ministry of Housing, Communities and Local Govt

There was also a team that stayed behind in order to make hourly checks on everyone to make sure they were safe and to take in the data at the end. Including a representative of the charity Homeless Link, who would independently verify the results.

We were briefed by Ajitha Sajeev, a fantastic long serving Newham officer, who has been recently been awarded a BEM for her work https://www.johnslabourblog.org/2020/10/newham-hero-honoured-by-queen-on-world.html

I went as a team driver with Kris, a manager from the homeless charity Thameslink, who I have been  on many previous Newham Counts together.

We had a number of "hot spots" to visit and I was pleased that we found only one person sleeping rough that night in a large Newham retail park. We were able to have a constructive  conversation with him and found that he did want help with getting his national insurance number, in order to find work (and hopefully safer accommodation). He did not want accommodation that night but outreach workers will visit him very early the next morning to see what they can do to help.

While I cannot yet say what was the total number of people sleeping rough in Newham on Thursday due to the need for verification, in September 2018 it was 105 but in September 2020 if was only 12. This is thanks to the superb outreach work carried out by our officers, stakeholders and volunteers but also due to the government funding promise following the announcement in March of the "everyone in" policy for all rough sleepers to be offered accommodation due to covid.

This shows what can be achieved if you have the funding and political will to solve a housing crisis. Hopefully this will be a lesson learnt.

Since it was so quiet I was home just after 2am.