"A Space to Learn, Live & Play" (but can West Ham residents afford to live here?) 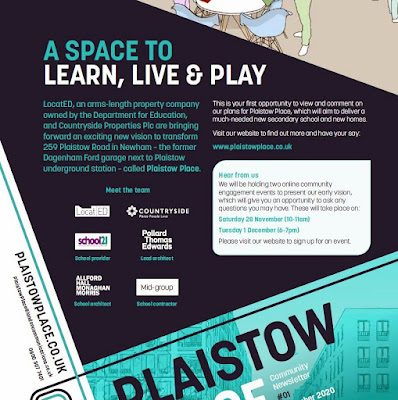 Today I joined a zoom presentation by the developers of the old Ford car dealer showrooms at 259 Plaistow Road, West Ham ward, Newham.

I was there as a local ward Councillor with my colleague Cllr McLean (Cllr Whitworth had a medical clash and will be briefed later).

This site is now owned by the Government's Department of Education and they want to build a new 6th form school with the Big Education Trust as well as community facilities, work places and shops.

So far so good since it appears that Newham is in  need of more school places. While I would have preferred a local authority school to provide spaces the government refuses to allow Councils to build schools anymore.

However, my challenge to the development team today was how many of the additional 400 homes  proposed to be built on the site will be genuinely affordable to local residents?  The Government spokesperson made it clear that they will expect the cost of buying the land and building the school will be offset by selling many of these homes.

In Newham we have a massive housing crisis. If the new school reflects Newham,  66% of its pupils will be living in poverty after their parent's housing costs are taking into account.

We also have the worse homelessness in the UK with more than 50% children living in temporary accommodation than in the entire north of England.

It seems as only 30% of these homes will be deemed (even under the current nonsensical government definition) "affordable" even if that means charging 80% of market rent.  In Newham this could be £1400 per month.

It would appear that only a small percentage of these homes will be at social rents (40-50% of market rents) that local families in need will be able to afford.

The developers said that they will get back to us on this important issue.

In the meanwhile they are informally consulting with local residents and I would encourage everyone to look at their website https://plaistowplace.co.uk/  and also attend if possible one of their webinars this Saturday and next Tuesday (links not currently working?). Full consultation is due to take place next year.

I made it clear that the proposed levels of social housing are completely insufficient and must be reviewed. The developers bought this land in late 2018 after the May election when all Councillors and the Mayor were elected on a very clear manifesto commitment that 50% of all such developments must be at social rents.