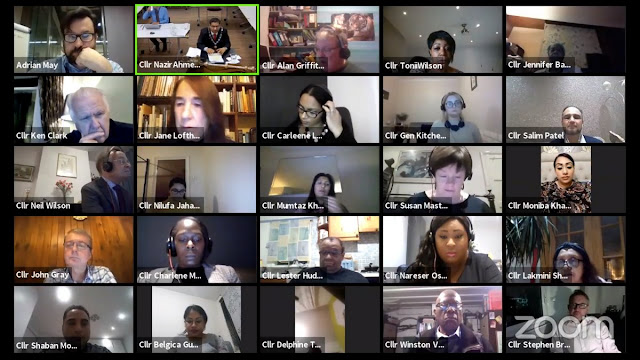 Picture is from the virtual Newham Council meeting on Monday, where I was pleased that it was agreed that the future governance referendum of our borough, due to be held next year on 6 May 2021 will give residents the real choice between carrying on with the present Executive Mayor system (all legal power in the hands of one person) or instead the Committee system (where power is shared amongst locally elected Councillors).

In the debate, I spoke strongly in favour of the Committee system. While I respect the views of those who wanted the question on the ballot paper to be different eg a choice between Executive Mayor and what is called the “Leader and Cabinet” model. I argued that this is not a real choice, since at best, the “Leader and cabinet” model is in reality "Executive Mayor Lite".

The Committee model option is a real progressive alternative to the Executive Mayor. We need to change the political culture in Newham and I think the Committee model is the only one that will deliver on our manifesto commitment to deliver real participatory democracy to the people of Newham.

Check out the debate here on YouTube (and the excellent motion on Making Misogyny a Hate Crime by Cllr Mumtaz Khan) and also the twitter account https://twitter.com/ForNewham, website https://newhamforchange.org/ and Facebook page https://www.facebook.com/newhamvotingforchange set up by local residents to support the Committee model next May.