"Building for the future after years of neglect" Newham Voices 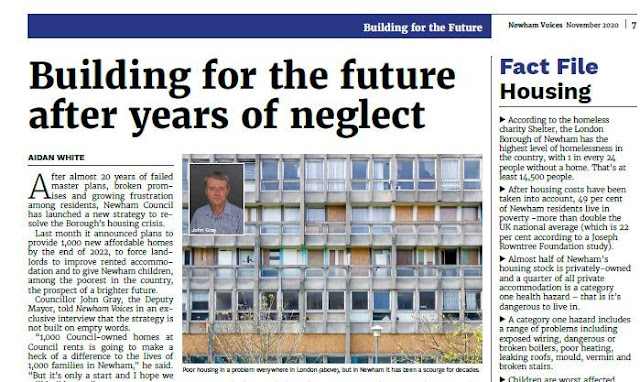 Last month Aidan White from the new community newspaper "Newham Voices" interviewed me in my previous role on housing issues. Subscribe to Newham Voices for £5 per month via its website and you will get a free hard copy of the newspaper delivered to your home.
"After almost 20 years of failed master plans, broken promises and growing frustration among residents, Newham Council has launched a new strategy to resolve the Borough’s housing crisis. Last month it announced plans to provide 1,000 new affordable homes by the end of 2022, to force landlords to improve rented accommodation and to give Newham children, among the poorest in the country, the prospect of a brighter future.

Councillor John Gray, the Deputy Mayor, told Newham Voices in an exclusive interview that the strategy is not built on empty words. “1,000 Council-owned homes at Council rents is going to make a heck of a difference to the lives of 1,000 families in Newham,” he said. “But it’s only a start and I hope we will build more.”

Cllr Gray says that poverty in the Borough is rooted in the homes crisis. The scale of the crisis is shocking. “After you take housing costs into account, some 50 per cent of residents and 66 per cent of all children in Newham live in poverty. I find these figures astonishing,” says Cllr Gray.

He says there are more children in temporary accommodation in Newham alone than the entire north of England.
The new Council strategy includes:

• Repairing and upgrading sub-standard homes, with a focus on vulnerable adults and older
people’s housing;

• Targeting bad landlords and prosecution of those who don’t maintain property;

• Support for landlords and residents who want to improve and upgrade their property;

• Creating more “green homes” through a programme of energy- efficient retrofit across Council
properties and encouraging private landlords to do the same.
Priority to dealing with homelessness. “Where homelessness cannot be prevented, we will ensure early intervention and we’ll build upon the success of the “everybody in” programme,” he says. In the first days of the lockdown in March rough sleepers were moved off the streets within days.

The Council also plans radical change to its waiting list policy which currently is biased in favour of people already in work and requires people to have lived in the Borough or have connections in the area for five years. Instead, Cllr Gray says priority will now be given to households on the waiting list that are most in need and the list will be open to people who have lived in the borough for three years in line with the rules for neighbouring councils.

“There are now considerably more families with children in desperate need of decent housing,” he says. Those with greater needs on the waiting list will be helped before those who may have been on the list longer, but don’t have an urgent need, even if they have a job. “Covid-19 job losses mean giving

As well as making sure homes are fit for purpose as everyone tries to tackle climate change there’s a promise of investment in existing properties to ensure that these properties are safe, well maintained and managed.

“A quarter of Newham’s CO2 emissions come from domestic energy use,” says Cllr Gray. “It’s not just cars and aeroplanes that are the problem. We are setting ourselves high standards for low-energy homes.”

Cllr Gray says the Council will give priority to those in employment makes even less sense. We will now focus on those most in need, and we won’t be penalising those who don’t have jobs during Covid-19 and the forthcoming recession,” says Cllr Gray.

“We recognise that waiting time is important to people’s sense of fairness,” he says, “but we’re adjusting so that it’s those who have been in need for the longest time who get priority.”

The Council aims to tackle overcrowding – particularly where there are children involved – which is a key risk for health. People living in cramped, overcrowded conditions will now be regarded as in acute need.

Among the innovative approaches under consideration to get moving quickly and efficiently to tackle the crisis are plans to build on the top floors of existing blocks, create modular homes to boost temporary accommodation, and a joint venture with the NHS.

The Council is organising consultation with residents until December with virtual focus groups being organised with people in the categories most affected. Final proposals will be adopted early next year.

How much is “affordable” rent?

In Newham, the term is based upon what is called “London affordable rent” which is linked to local incomes and is meant to be around 50 per cent of the market rate. So, for example, if it costs £1200 a month to rent a two-bedroom apartment privately, an affordable rent would be around £600 for the same property. More detailed examples of affordable rents for different properties can be found at https://www.london.gov.uk/sites/default/files/ad_132_affordable_and_genuinely_affordable_rents.pdf.

(slight typo in article. Waiting lists eligibility will increase from 2 to 3 years in line with neighbouring councils)
Posted by John Gray at Saturday, November 21, 2020

You are very modest John. What a great achievement. Thanks for sharing this.