"Opinion: Unison could soon have a female general secretary – about time, too" 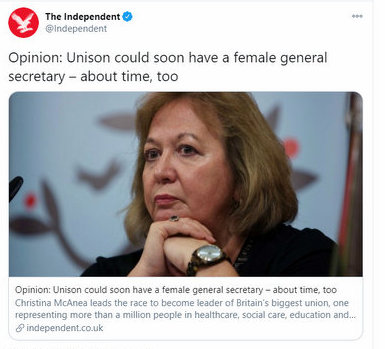 The leadership race you may have missed that could have huge consequences for UK workers
Christina McAnea leads the race to become leader of Britain’s biggest union, one representing more than a million people in healthcare, social care, education and local government

"The election across the Atlantic that’s been dominating the news cycle means that an important vote being conducted on this side of the pond hasn’t generated the interest it should have.

It is for the leader of Britain’s biggest union, one representing more than a million people in healthcare, social care, education, local government and more. The identity of Unison’s general secretary matters. They play a vital role in fighting for the interests of workers, many of whom have either been working on the front lines of the pandemic or have risked their lives to provide services relied upon by millions of people while it’s been raging.

More than three quarters of those workers are female. This raises a glaring issue: Unison has never had a female general secretary. That is true of all the big three unions (the other two being the GMB and Unite). But it’s particularly problematic at Unison given the profile of its membership and the union movement’s rhetoric concerning equality.

It’s a problem potentially on the verge of being solved. There are four candidates on the ballot, three men and one woman. The one woman is Christina McAnea, who looks like the front runner. As the ballots were sent out, she had been nominated by 216 union branches, nearly as many as the other three put together. She also had the union’s National Executive Council – Cymru/Wales, Scotland, Northern Ireland and six English regions – and five service (industrial) groups in her corner.

Of course, it requires more than gender to win the job. But the point about McAnea is that she has every qualification necessary to do it well and a back story that should chime with many members.

She was born and brought up in Glasgow, where she lived in the tough Clydeside Drumchapel council housing estate. Her mother was a school cleaner and dinner lady. She left school at 16, putting herself through university at the age of 22, before becoming a housing officer for Glasgow City Council.

If you’ve had any involvement with local government, you’ll know that can be one of the tougher roles in which to start a career. It’s a hard, and sometimes heart-breaking job, where desperate need crashes into a chronic lack of supply. McAnea moved on to the GMB union and from there to NALGO, one of the three unions that merged to form Unison, where she is now the assistant general secretary for bargaining, negotiations and equalities. So no – it isn’t just on gender grounds that she’s a strong candidate for the role.

Having talked to her, she also has a vision for how to drive an organisation, whose membership has grown rapidly through the pandemic, forward. She’s keen on fostering digital engagement to make the organisation more accessible and responsive, which will be important as new ways of working are increasingly adopted, potentially leaving some people feeling isolated.

The front runner doesn’t always win, of course, and the perception of being the establishment candidate doesn’t necessarily help, although the performance of politicians claiming anti-establishment credentials such as Donald Trump or Boris Johnson might prompt some to reconsider that.

Roger McKenzie, second in terms of branch nominations with 131, along with one service group executive and one regional council, is part of the same senior team as McAnea. He’s an assistant general secretary, with a long history in the union movement.

He would be the union’s first black general secretary, which would also be a welcome development, as would Hugo Pierre, who boasts 31 nominations. Nominated by one service group executive, two regional councils and 99 branches, Paul Holmes, who came third in 2010, is the final candidate.

An organisation with a majority female membership never having been run by a woman is a sad state of affairs in the 21st century. Unison’s members therefore have a chance to make some good history in what has been a terrible year. They can correct an injustice.

It ought to be easier for them than it is, but the government cynically still refuses unions the right to conduct digital ballots, which inevitably limits turnout, particularly when people’s minds are often on other things.

This appears to be another example of the dim view the Conservative Party has of democracy. The election should be about the candidate the largest possible number of members feel would best represent them, not the who can persuade enough knackered workers to remember to put their ballots in the post box".