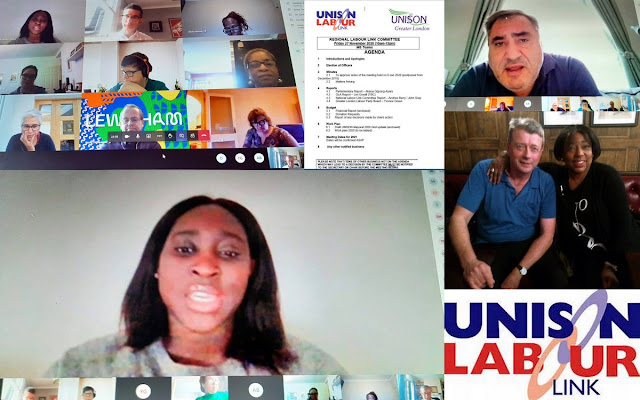 I was really pleased this morning that both myself and Yvonne Green were re-elected unopposed as the respective Chair & Vice Chair of Greater London Labour Link committee for the next 2 years. The last two years have been very difficult for all of us in the Labour movement and it was good to have the trust and confidence of a newly elected committee for the next term.
The meeting started on a sad note as we held a minutes silence for former long serving committee member, Ann Jefferson, who has recently passed away. A letter of condolence and offer to pay into a charitable cause has been sent to her son.

UNISON Labour Link works directly within Labour to take UNISON's policies into the heart of the party. In London we affiliate to the Labour Party Region and all 32 Constituency Labour Parties. We have representation on the London Labour regional board and have a network of branch Labour Link officers and CLP delegates. We work closely with other affiliated trade unions.

The committee has a budget which supports a wide range of training and mobilisation events, campaigning and importantly, UNISON members who seek elected office.

It is comprised of directly elected London UNISON members (such as myself and Yvonne) and representatives of our regional self organised groups. All of us are UNISON and Labour Party activists.

At the AGM we had a fantastic and detailed Parliamentary report followed by a Q&A with former London Labour Link activist, now MP for Erith and Thamesmead, Abena Oppong-Asare, who has been recently promoted as Shadow Exchequer Secretary to the Treasury

London Assembly member and leader of the Labour Group, Len Duvall, also gave his report and submitted a 14 page update on the great work that has been done to protect our capital city during the pandemic.
I gave a commitment on behalf of the committee that we are united to do everything possible to re-elect Sadiq Khan as our London Labour Mayor and Labour Assembly members in the election in May 2021.

Once the other business of the meeting had finished in my closing remarks as Chair, I also spoke about how in our workplan we ought to consider in light of Covid-19, how we can prioritise the promotion of the UNISON Ethical Care charter in London in recognition of the personal sacrifice by so many of our most important but vulnerable members.
(Picture of Yvonne and I in collage was obviously after the last AGM in 2018)
Posted by John Gray at Friday, November 27, 2020