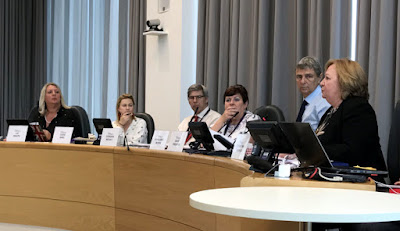 "This report is intended for members of the UNISON Community Service Group Executive and for branches with Community members. Please circulate it to anyone who may be interested.

UNISON National  Executive Council (NEC) is elected biannually by our 1.3 million members via a secret ballot.

The NEC meets in the conference chamber of the UNISON centre in London usually 4 or 5 times per year (and daily during our National Delegate Conference).

On 18 October there was 60 NEC members present (and 6 apologies). 12 NEC members teleconferenced in from elsewhere in the UNISON centre and one member via video conference from SW England (pilot).

Our General Secretary, Dave Prentis, started this meeting with a tribute to the former General Secretary, Rodney Bickerstaffe, who had passed away earlier this month. Dave described Rodney as a very close personal friend and a “Giant of the trade union movement” whose greatest achievement was the introduction of the National Minimum Wage and who also helped found UNISON. There will be a private family funeral  but UNISON will celebrate his life at a future event.

The NEC stood for a minute's silence in memory of a number of colleagues who had passed away since the last NEC meeting.

Next was a positive report on organising by NEC sub-committee Chair, Chris Tansley. Despite all the problems of cuts and redundancies it looked likely that UNISON would have net growth for the year.
A majority of the growth was in the private and voluntary sector (including Community).  They recognised that it was difficult to organise in that sector. But it is not all doom and gloom compared with some other unions who are facing massive losses in membership.  The number of our young members is also beginning to grow.

In the general debate on the report I made the point how difficult it was to organise in the Community sector even in large employers, who may have staff spread thinly in hundreds of different locations all over the UK, across all UNISON regional and branch boundaries.  Former president Maureen Le Marinel said Community will be biggest service group in union if outsourcing continues.

This was followed by an update report on Service Group Pay campaigns and  National Industrial Action. The TUC/UNISON lobby of Parliament the previous evening had been largely successful and UNISON had written to Tory MPs in marginal seats reminding them that there was more union member in their seats than their June 2017 majority.  The “Pay Up Now” campaign is being coordinated across all service groups. There are separate political and industrial  campaigns.

During a long (and at times rambling) debate on the pay campaign, I pointed out that it should be possible to carry out successful industrial action in support of more pay but only if we do the groundwork first and explain, encourage and organise our members. UNISON has a number of large well organised and well led branches up and down the country, who can deliver effective action However; we also have poorly organised branches with very low membership densities. We want to run a successful campaign like the Public Pension dispute and not the last disastrous 2 day local government pay strike.

It was agreed that we need to measure what action members are up for but also ask where are the other unions?

The NEC finally decided to offer “advice” to service groups to consider consultative strike ballots. The sectors have autonomy over pay claims and rightly the NEC cannot instruct them.

After a short lunch break there was a finance update which was generally good but we are still but losing higher paid members who pay more in subscriptions.

In his General Secretary report, Dave Prentis reported on the many victories that UNISON had achieved recently in various parts of union. Such as a successful outcome to the Glasgow Janitors dispute which saw a 6% pay rise. A victory in Salford which saw an 11% increase for Social Care workers. A recent resolution of a difficult Teaching Assistant dispute in Derby which had just been accepted by a 62% ballot and course the fantastic UNISON legal victory over employment tribunal fees.

He warned us that there is still a serious threat to UNISON over changes to DOCAST (union subscriptions taken out of pay) and to the political funds which must remain a top priority.

Afterwards there was a discipline report and verbal update on our insurance partner UIA. Minutes of the last meetings approved and committee reports noted.

(Please note that this is my personal report only. If you are a Community member and wish to discuss this report or any other issue with me then please email me. Also, if you want me to come and speak at any branch or regional meeting about Community issues then let me know and if I can, I will )
Posted by John Gray at Sunday, December 03, 2017