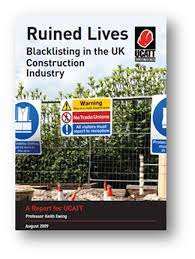 A new report published by independent think tank the Institute of
Employment Rights recommends a public inquiry is conducted into the blacklisting scandal, and sets out a Manifesto Against Blacklisting, proposing changes to the law, including criminal sanctions for employers operating blacklists.

It has been eight years since the Information Commissioner's Office (ICO) raid of blacklist operation The Consulting Association found evidence that thousands of workers had been locked out of employment in the construction industry for such reasons as highlighting dangerous working practices or being a member of a trade union.

Despite continued legal action, justice has not yet been served, with Unite the Union now seeking compensation for 70 further workers who did not benefit from previous out-of-court settlements, and new evidence of continued blacklisting in the construction industry being debated in parliament.

In the latest IER publication – Blacklisting: The need for a public inquiry – Secretary of the Blacklist Support Group, Dave Smith, maps out the barriers to justice experienced by workers, both in terms of accessing the tribunal system and in securing a guilty verdict for their former employers. He emphasises that what the thousands of victims of blacklisting want the most is for the individuals responsible for their plight to be publically held to account.

"It's been an ongoing fight for decades and the end still seems distant," Dave Smith, Secretary of the Blacklist Support Group and co-author of the report, said. "Before the 2009 ICO raid that finally proved us right, we were labelled conspiracy theorists, and even after we had the evidence it was an uphill struggle to be heard in court.

Even for those who eventually received compensation, money alone is not justice. Blacklisted workers spent years of their lives struggling to make ends meet, with many reporting to me that the strain stretched beyond finances, to their families and relationships, their mental health, their social lives.

What blacklisted workers most want to see is the individuals responsible for their suffering to be held to account. We want a full public inquiry to investigate the truth behind what happened, and we want a change in the law to prevent other workers from going through what we have."

The publication concludes with a Manifesto Against Blacklisting drafted by employment law expert Alex Just, who makes several recommendations for changes in the law. Key recommendations include:
"It is clear that the law as it stands is not robust enough to protect workers or to bring those operating illegal blacklists to account. Not only is there still a requirement for further legal action eight years on, but the employers involved continue to make billions in profit from public contracts having been able to evade being found officially 'guilty' of acts they have publically admitted to," employment law expert and co-author of the report, Alex Just, explains.

"A thorough examination of the obstacles faced by blacklisted workers over the last eight years has revealed several key factors that we recommend are reviewed and changed in order to prevent another years-long scandal being dragged through the courts in the future. The law must provide justice to those workers who have lost years of their lives, and it must act as a deterrent to the secret continuation of blacklisting by holding those responsible to account."